UPS Inc. and its brown delivery trucks have ruled American streets for decades.

But Amazon, UPS’ largest customer and competitor, could overtake the Sandy Springs, Ga.-based company as the nation’s largest package carrier this year.

The rivalry traces its roots to the 2013 holidays, when a meltdown of the UPS shipping network led to millions of gifts ordered not arriving in time for Christmas. Amazon issued gift cards and refunds to mollify angry customers — and rapidly built out a home delivery network so it wouldn’t have to rely so much on UPS.

The high-stakes competition is one more striking example of how West Coast tech titans are disrupting traditional industries and pressuring old economy stalwarts to reinvent themselves or risk being left in the rearview mirror.

How the battle plays out could have a major impact on how consumers shop, how quickly they get their packages and how much they pay to have goods delivered. Also hanging in the balance are the fortunes of UPS’ 534,000 employees, and lucrative UPS union jobs that pay drivers nearly $40 an hour.

It isn’t only Amazon’s warehouses, airplanes and trucks that are shaking up things. The e-commerce behemoth also has popularized the idea of “free shipping” — a potentially existential threat for UPS, which has long been paid handsomely for delivering goods to stores, offices and homes. 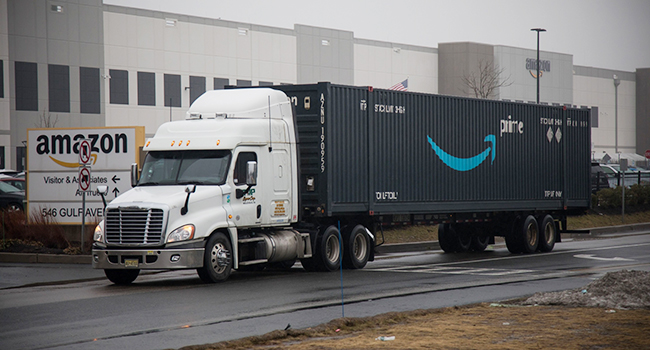 Amazon delivered more than 5 billion packages in the U.S. in 2021, while UPS delivered roughly 5.5 billion U.S. packages, according to company figures and industry estimates. Amazon’s numbers are far from exact, because the company doesn’t share all of its shipping data.

Amazon has said it could surpass UPS this year, and it’s not alone in that prediction, even though UPS boasts a more extensive air and ground network that it built up over a century.

Marc Wulfraat, president of logistics consulting firm MWPVL International, believes Amazon will surpass UPS in U.S. package volume in 2022 — and in five years have a logistics network large enough that it won’t need to rely on UPS or the U.S. Postal Service.

So far, UPS’ revenue and profit have kept growing despite the competitive threat. That’s because the number of packages are rising amid the broader surge in e-commerce. That surge has gone into an even higher gear during the pandemic, with consumers ordering anything and everything to be shipped right to their doorsteps.

UPS has grown its own revenue by two-thirds since 2014, including a 15% increase last year. It expects its revenue to top $100 billion for the first time in its history this year. Its profit margins, while volatile, have remained generally strong.

Unlike FedEx, which cut ties with Amazon a few years ago, UPS continues to treat Amazon as a customer, not just a competitor. Amazon and its affiliates represented about 11.7% of UPS revenue last year, more than any other retailer.

“We have a great relationship with Amazon. And we have mutually agreed about the volume that we should take and the volume that they should keep that works best for both companies,” UPS CEO Carol Tomé told investors earlier this year.

But Tomé also recognizes the playing field is changing. Since she took the reins of the shipping giant, her rallying cry has been “better not bigger” — a marked shift in approach for a company that touts itself on its website as “the world’s largest package delivery company.”

As part of that strategy, UPS is increasingly targeting areas with a minimal Amazon presence. They include logistics for small and medium-sized businesses without their own warehouses or shipping departments, business-to-business shipments, and the specialized world of delivering pharmaceuticals and other temperature-sensitive medical shipments.

Amazon, for its part, says it is scaling its shipping network “to bring even faster delivery to more customers.”

The Competitive Threat of ‘Free’ Shipping

UPS has depended on the cash cow of package delivery for about a century.

The company began as a messenger service in 1907 that became United Parcel Service in 1919. By 1975 it served every address in the U.S. and started expanding internationally.

For decades, UPS and FedEx virtually have had a shipping duopoly across the country, with UPS becoming better known for its extensive ground network and FedEx for its overnight shipping by air. The Postal Service also is a major player, but it focuses on slower delivery of mail.

UPS’ massive global shipping network has long stood as a bulwark against competitors, because of the cost of building the infrastructure to move so many packages around the world so quickly. DHL made a major U.S. push after being acquired by Germany’s mail monopoly Deutsche Post, promising that “yellow is the new brown” in an advertising campaign. By 2008 it had retreated, transferring air parcel deliveries to UPS and slashing its ground network.

Amazon has proven a much tougher challenger because it is a giant online retailer. Through its own fulfillment network, it can ship products for the millions of businesses selling them on its website.

The company started as an online bookseller in 1994, partnering with national bookstore chain Borders Group in 2001 before driving it out of business. After it expanded its product offerings, other retailers like Circuit City, Sears and Toys “R” Us filed for bankruptcy protection.

Amazon’s retail strategy has succeeded in part by promoting two-day and next-day delivery, as well as free shipping.

On its website, Amazon suggests to e-commerce businesses that they increase prices to cover the cost of free shipping. For consumers the cost of shipping becomes more opaque, wrapped into the total price of the product.

“There’s no such thing as free shipping,” said Bill Seward, UPS’ president of global customer solutions. “Even if you don’t want to charge for it, it’s costing a lot.”

Amazon founder Jeff Bezos “has for a long time said, ‘Your margin is my opportunity,’ ” said Satish Jindel, president of shipment technology firm ShipMatrix. If Amazon uses a service that makes better margins than Amazon, Bezos will “want to bring it in-house,” Jindel said.

The company ordered 100,000 Rivian electric delivery vans and has been testing package delivery robots in Atlanta. In the air, it has more than doubled its flight network in the last couple of years and now has 85 planes in its Amazon Air fleet. It also has expanded at Hartsfield-Jackson International Airport since launching flights there in 2019.

It’s still unclear how the battle between frenemies Amazon and UPS will shake out.

UPS remains formidable, with more than 1,800 facilities around the world and a fleet of more than 280 planes and hundreds more that it leases or charters. It sees its hard-to-replicate global shipping network as a competitive advantage.

“We expect there to be new competitors in the future,” said UPS’ Seward. “Bring it on. We’re ready to go.”

UPS also is diversifying and specializing in lucrative areas like health care, making it less dependent on its traditional business.

UPS can use its network of refrigerated and freezer warehouses and shipping technology to transport pharmaceuticals and biological products that need to be kept at precise temperatures. By playing a key role in shipping COVID-19 vaccines around the world, UPS gained even more experience and significantly expanded its freezer capacity.

And it has launched a drone delivery airline, using drones to deliver CVS prescriptions, urgent deliveries in remote areas and medical samples on a hospital campus.

One thing not under dispute: The world of shipping is changing in a big way.

“I don’t really see FedEx and UPS failing and disappearing,” said LateShipment.com CEO Sriram Sridhar. Nonetheless, he predicted, they “will have to find ways to reinvent themselves over the next decade.”