Miller, who like Abbott is a Republican, said the governor’s six-day old program of heightened vehicle inspections at Texas-Mexico border crossings is strangling commerce and doing nothing to curb undocumented migrations. The GOP infighting is a sign of rising tensions between the pro-business and law-and-order factions of the Texas Republican Party.

Mexican truckers began blockading a key border bridge on April 11 to protest Abbott’s decision last week to deploy state troopers to conduct vehicle inspections. Traffic at the Pharr-Reynosa International Bridge has ground to a halt and trucks diverted to other crossings are causing huge delays. 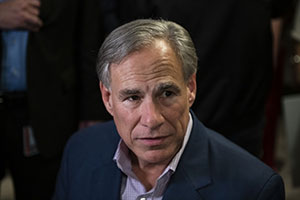 “This is not solving the border problem, it is increasing the cost of food and adding to supply chain shortages,” Miller said in a statement on his office website. “Such a misguided program is going to quickly lead to $2 lemons, $5 avocados and worse.”

The blockade is also becoming an issue in Abbott’s campaign to win a third term in November’s general election.

“Abbott’s political stunts are causing inflation, driving up prices, and hurting businesses throughout Texas,” Beto O’Rourke, the Democratic nominee for governor who will challenge Abbott on Nov. 8, said in a tweet.

Abbott is expected to meet with Nuevo Leon Gov. Samuel Garcia at the Colombia-Solidarity International Bridge near Laredo, Texas on April 13. The governors of the border states of Tamaulipas and Coahuila sent a letter on April 12, urging Abbott to end the “overzealous inspections” that are “holding the border hostage” and causing expensive delays to an already-fragile supply.

“If something is not done immediately, the average consumer cost will skyrocket within days,” the governors said. “People are having trouble putting food on their tables, and these policies will make it harder.”

John Sommers II for Transport Topics Truck ArcBest experienced a decline in earnings year-over-year on moderate revenue gains during the...

PacLease In trucking, costly service interruptions and delays stemming from equipment problems can be reduced with the use of diagnostic...

Mitsubishi Warehouse Deal With Port of San Diego Falls Through

The Port of San Diego's 10th Avenue Marine Terminal, which would have been the location of a Mitsubishi Cement Corp....

PepsiCo has rolled out zero-emission vehicles, including the battery-electric Tesla Semi, at its Modesto, Calif., location. (PepsiCo Inc.) LAS VEGAS...