JAMESTOWN, N.D. — Ahmed Hussein was sitting in his semitrailer at the S&R Truck Plaza eager to get to Mandan, N.D. The owner and operator of A.L.A. Transport said he has been passing the time by talking on the phone, reading content online and going through social media.

Hussein said it was the first time he has been waiting somewhere because he cannot get on Interstate 94, which still was closed as of about 5 p.m. on April 14. He said people were parked at S&R Truck Plaza who had been there for two days.

“I hope we get some kind of information when they open it right away,” he said. “Somebody knock on our doors and say, ‘Hey you got to leave. It’s open now.’ ”

THE SUN IS UP! Here’s your morning view of road conditions across North Dakota. View photos 24/7 by clicking the camera icon on the bottom of https://t.co/EXHjjzmsoB. Winds are down and plows have been out since the middle of the night clearing roads. Thank you for your patience! pic.twitter.com/DuEhpnwKk2

Hussein is one of the many semitrailer drivers parked in Jamestown because I-94 to Montana was closed overnight April 13 due to a blizzard. Limited parking for commercial motor vehicles was reported April 13 in Jamestown, according to the North Dakota Department of Transportation. NDDOT said parking for large vehicles in Jamestown and Bismarck was near capacity, and commercial vehicle drivers were encouraged to plan accordingly.

Hussein said drivers keep their semitrailers running even when they are not going anywhere.

“With the fuel prices, it’s killing me,” he said.

The parking lots at Walmart and Buffalo Mall were full with semitrailers.

“It’s probably the most trucks I have ever seen,” Stutsman County Sheriff Chad Kaiser said. 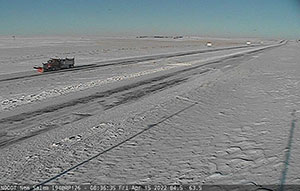 The Jamestown area was in a blizzard warning until 7 p.m. April 14.

At about 2 p.m., Kaiser said visibility was reduced on highways north and south of Jamestown. He said there was blowing snow and some areas with snow-covered roads.

“Definitely some slush, so it’s kind of melting,” he said.

U.S. Highway 52/281 from Jamestown to the Canadian border was opened at 4:45 p.m. although the no-travel advisory still was in place. Most of Stutsman County remained under no-travel advised at 6 p.m.

As of 6 a.m. April 14, the North Dakota State Hospital recorded 3.5 inches of snow since April 12, according to James Telken, a meteorologist with the National Weather Service in Jamestown.

Telken said the Jamestown area could receive an additional 3 to 5 inches of snow starting early April 17.

“There are still some questions on how quick this one will move through and exactly where it will hit,” he said. “The one good thing, at least at this point, the winds shouldn’t be as strong as it was in this event. It will still be breezy and gusty at times.”