PALMETTO, Fla. — The owners of World Direct Shipping have announced a bold initiative to send imported manufactured goods from SeaPort Manatee to the Northeast via a proposed CSX rail connection.

Daniel Blazer appeared with his father, company founder Robert Blazer, at the Manatee County Port Authority meeting April 21 to announce they have been working with CSX and port staff on the proposal.

WDS ships would bring appliances and other goods manufactured in Mexico to SeaPort Manatee where they would be loaded onto trains for shipment via rail to Chambersburg, Pa. — an inland port — for distribution elsewhere in the Northeast. 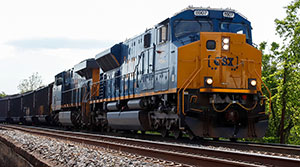 Daniel Blazer said he has been working on the proposal for about five years and that CSX is very interested.

In fact, Robert Blazer said CSX has already come up with the specifics of the agreement.

Some of the specifics to make the proposal a reality include working through security concerns, financing and adding a multimodal yard, which would be located behind the Port Manatee Intermodal Center — land that is now home to a mountain of phosphate rock.

The Blazers hope to have the rail link up and running within 12 months, and envision shipments six days a week.

“On our side of the bargain, we will have a third shift here soon so that we operate 24 hours a day. We are constantly making changes to handle the growth. It can be painful, but we will fix it,” Daniel Blazer said.

World Direct Shipping started doing business at SeaPort Manatee in 2014 with a single chartered vessel, making a weekly voyage to Mexico to import agricultural goods into the United States.

The Blazers, owners of the huge Dekalb Farmers Market in Decatur, Ga., started the shipping business to overcome difficulties they were having importing Mexican agricultural products by truck.

They now own three vessels, which make daily voyages between Mexico and Port Manatee, importing mangoes, plantains, bananas and other produce. They also own about 450 acres near SeaPort Manatee for future distribution and industrial uses.

Port authority members greeted the proposal with enthusiasm, but had questions about funding and security issues.

“The word that comes to mind is juggernaut. We are going to find a way to get this done,” port authority chair Reggie Bellamy said. “We are excited that you are here, but I am mostly thankful.”

Authority member James Satcher agreed. “That’s a lot of employment and a lot of business,” he said.

Mark Meyer, director of marketing and sales for Regional Rail, is working with SeaPort Manatee staff to facilitate the proposed CSX line.

Aside from the economics, another benefit would be to alleviate some truck traffic on highways, Meyer said.

“If it doesn’t work, it means more trucks, more containers on the road,” Meyer said.

Port authority member Carol Whitmore asked about how the improvements would be funded.

“It remains to be determined,” port director Carlos Buqueras said. “We own the land. The material (the phosphate rock) won’t remain there. We have the footprint. We will bring back proposals how to accomplish.”