The Environmental Protection Agency is proposing its first new rules governing heavy-truck nitrogen oxide emissions in two decades, but engine manufacturers say the proposals would be difficult to meet and counterproductive because they could slow the move to cleaner technology.

EPA is proposing two options for reducing nitrogen oxides (NOx), which include nitric oxide, nitrogen dioxide and other air pollutants.

Option 1 would place a limit of .035 gram of NOx per brake horsepower-hour for model years 2027-30, followed by .02 gram in the years following. The agency notes NOx standards would be 90% lower than they are today, when the standard is .2 gram. The option mimics a California rule. Option 2 would require .05 gram starting with model year 2027.

The agency plans to finalize the change before the end of 2022. The proposal stems from an executive order by President Joe Biden. EPA also plans to raise greenhouse gas emission standards starting with model year 2027.

“We would be concerned that, yes, Option 1, as stated today, would not allow for a diesel solution in 2027,” she said, noting that Option 2 is more feasible, but the increased useful life is a problem because products age over time. The manufacturer supports stronger NOx requirements and believes emissions can be lowered as early as 2027. Cummins also supports efforts to reduce emissions eventually down to zero. 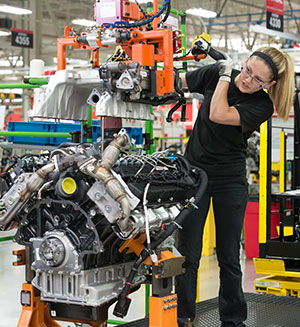 Jed Mandel, president of the Truck Engine Manufacturers Association, said Option 1 is not achievable for the industry except with trucks powered by natural gas.

He said that .02 gram is so low that, with the variability that comes with engine production, laboratory testing, usage and fuel, manufacturers would have to design to a less-than-zero standard, which would be impossible.

“We are fundamentally opposed to Option 1,” Mandel said. “It’s not technologically feasible or cost effective and truly not needed for the balance of the country.”

He added that the .05 gram standard with Option 2 is challenging but doable, though changes are needed to the useful life and warranty schedule, he said. The current in-use compliance program would cause customers to have false failures. “We’ll need to see the devil in the details,” he said.

If enacted, the rule would be the first raising NOx standards since the last rule was finalized in 2001 and implemented in two phases between 2007 and 2010. Glen Kedzie, American Trucking Associations’ vice president of energy and environmental counsel, said memories of the breakdowns and towing bills associated with the last regulation remain.

ATA supports further reductions in NOx emissions but is not taking a position on either option, said Kedzie. The final rule must produce trucks that are affordable, reliable and able to operate in a variety of duty cycles. He said stakeholders and the agencies have discussed a sliding scale for different truck classes. 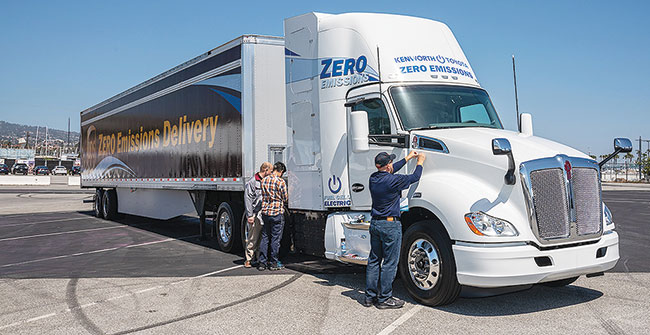 Engine manufacturers say the real issue is the lack of fleet turnover: Nearly half the fleets are operating post-2010 engines. (CARB)

EPA says heavy-duty vehicles will produce 32% of the country’s mobile source NOx emissions and 89% of its on-road emissions in 2045.

The agency says Option 1 would reduce NOx by as much as 60% in 2045. Option 2 would reduce it 47%. EPA forecast — long term — the proposals’ benefits would outweigh the costs.

Mandel said the industry has made extraordinary progress since EPA began regulating NOx in the 1990s. The current .2 gram standard is a 98% reduction from the previous on-road, unregulated levels.

Kedzie said EPA is trying to create a technology forcing standard that requires the industry to create new capabilities. No diesel engine is currently certified to a .02 NOx level. At this point, the biggest gains have been achieved, and now the industry is being asked to make “minuscule” gains.

“The smaller the emission you’re trying to capture, the more expensive it is because you’re trying to find the next level of technologies that can capture things that are almost nondetectable,” he said.

Kedzie noted that warranties are not free; they are paid for by the first purchaser. The lengthy terms would force some fleets to pay for warranty miles they don’t need because they trade their trucks beforehand.

“This’ll be the first time ever that we would have a warranty cost requirement that could exceed the cost of the technology fix to hit a regulatory target in terms of emissions from EPA,” Kedzie said.

With all the success manufacturers have demonstrated in reducing NOx emissions, the real issue is the lack of fleet turnover. Only about half the fleet is operating post-2010 engines, Mandel said. Replacing those older trucks with newer models would reduce overall emissions more than reducing emissions on new trucks from .2 gram to .02. But if those new trucks are too expensive, then truck owners will keep running those older trucks.

Moreover, Mandel said the manufacturers would have to reduce their investment in zero-emission vehicles like electric trucks so they could dedicate their resources to meeting the NOx regulations.

Mike Roeth, executive director of the North American Council for Freight Efficiency, contends the proposed NOx rules are counterproductive. EPA’s suggested reductions come at a time when the industry is transitioning to so-called zero-emission vehicles and trucks that produce reduced emissions with other technologies. 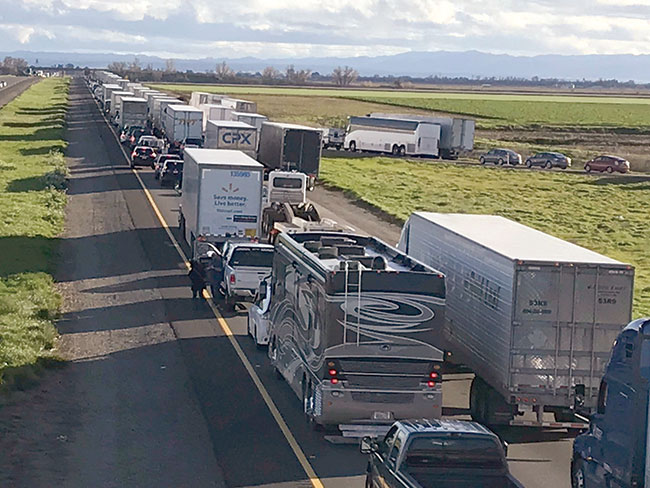 EPA forecasts that heavy-duty vehicles will produce 32% of the country’s mobile source NOx emissions and 89% of its on-road emissions in 2045. (Caltrans District 3 via AP)

“With all of that coming from entrepreneurs and startup companies to traditional, there’s just not enough engineers to go around,” Roeth said. “There’s not enough production to support all this variation. The trucking industry’s not high volume, so choices will be made by the truck builders and the engine manufacturers and others, and we’d kind of like to keep the focus on the big wins, the electric vehicles, the hydrogen.”

Members of the trucking industry expressed concerns about the proposal during a virtual hearing by EPA April 12-14. The comment period was scheduled to end May 16.

Volvo Group North America’s Dawn Fenton, vice president of government relations and public affairs, told EPA that the new standard must be strong enough to improve air quality, particularly in “environmental justice communities,” which are often poor and/or majority-minority communities that are most impacted by environmental issues.

However, the standards should not create unintended consequences that slow market adoption of cleaner technology, Fenton said. She pointed to the previous “technology-forcing regulation” in 2001. Fleets rushed to pre-buy trucks in 2006, leading to a nearly 50% production workforce reduction at Volvo Group the next two years.

She said both of EPA’s options are “very aggressive.” Option 1 has not been shown to be “technically or commercially achievable” when combined with existing greenhouse gas regulations, which EPA is also proposing to strengthen.

“Although less onerous than Option 1, even Option 2 remains problematic as currently proposed,” she said.

Kedzie said EPA has said it believes this will be the last NOx engine standard for diesel trucks. He said some are saying the agency is trying to pressure the industry to move away from diesel engines.

“Is there some truth to that? Yes,” he said. “Will someone actually put a statement out like that? Probably not.”

Kedzie said the new rule could eventually lead to lawsuits.

“I know that there are some parties out there that are going to be putting in pretty extensive comments to the docket to kind of lay the foundation and then decide when the final rule comes out if they want to pursue litigating this regulation,” he said.