Two Ohio legislators are optimistic their bill will pass in the General Assembly that would pay 50% of employer expenses to train truck drivers under a four-year tax credit capped at $25,000 per company.

House Bill 197 has been pending in the Senate Ways and Means Committee since a March 15 hearing. The sponsors who introduced it in the House, Reps. Reggie Stolzfus and Rodney Creech, both Republicans, testified in favor of the measure during the panel hearing. 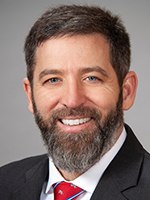 “We’re on summer recess now. I don’t know what the future of the bill holds. I hope it passes out of the Senate and we can get it passed,” Creech said. “It’s an election year for us so we’ll probably be out until November. A lot of things happen fast in November. They could have it voted out in a few weeks and be on the Senate floor in no time.”

If it becomes law, the legislation would incentivize employers to train employees to obtain a commercial driver license, which would boost employee wages and increase CDL drivers, Stolzfus said, adding that the Senate may act soon on the bill.

Stolzfus, who runs a small manufacturing business, said, “Hiring a CDL driver has always been the hardest position to fill. We started training our own employees to become CDL drivers and have had good success.”

Creech, who farms corn and soybeans, also runs a fertilizer and weed-control business. At age 18, he obtained a Class B CDL and began driving a truck. “As soon as I turned 21, I got my Class A. I’ve always been a CDL driver and understand the importance of it and wish more people did.” He once was a truck owner-operator hauling grain for others and himself. “I’m a farmer and trucking is a huge deal to not only my operation but to our community,” Creech said.

Creech has 42 employees and 40 trucks, mostly pickups — some of which pull trailers and require CDL drivers. “We ship in about 42 semi loads of fertilizer in the winter. All year we’re applying fertilizer and weed control on lawns just like we do on the farm.” 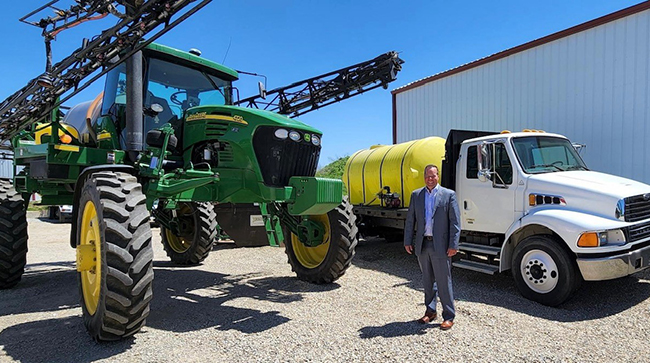 Creech stands near some of his vehicles, including a John Deere self propelled sprayer (left). (Courtesy of Rep. Rodney Creech)

“I think every company is short CDL truck drivers right now. And so it could be a kid out of high school working on a dock that maybe this tax credit would provide encouragement to take that next step, get a CDL and move up in the company. That’s what we want to see. We want to see small- to mid-size companies utilize this to help them out and help their employees go to the next level,” Creech said.

Thomas Balzer, president and CEO of the Ohio Trucking Association, said, “We’ve had initial meetings and had extremely positive feedback from it. So we are very optimistic about what the future holds with this piece of legislation.”

He said the bill also would enhance driving expertise and promote job retention. “This is really how do you better train drivers after they have a CDL to make them understand their job better, feel more comfortable, operate more safely and really indoctrinate them into the industry and give those smaller trucking companies an opportunity to offer training programs at the same level that some of the larger companies do,” Balzer said.

Employee wages during training are not covered by the credit, which would be applied to ordinary employer costs when training an employee to obtain a CDL or operate a commercial motor vehicle. Ohio would limit total credits awarded annually to $1.5 million.

According to the Legislative Service Commission, the credit against income tax could only be claimed by employers as sole proprietors or companies organized as a pass-through entity (a partnership, limited liability company, or S corporation owned at least in part by an individual, estate, or trust). It would apply for training expenses paid on or after Jan. 1, but before Jan. 1, 2026.

HB 197 by Transport Topics on Scribd

With a maximum credit of $25,000 per company, Creech said he hopes the incentive will result in three to five truckers being trained per company.

“Fleet management is a critical cost center for all our companies. Whether they are investing in hybrid trucks, installing no idle switches or using load and route optimization software, this industry spends heavily on vehicle purchase, function, insurance and maintenance. But the most critical part of our product distribution is human infrastructure,” she said, in testimony last year when the bill was introduced. “Getting our products from production centers to warehouses and into stores, demands qualified drivers.”

Saying they had a “moral obligation,” California regulators could soon ban the sale of diesel big rigs by 2040.The proposal...

The U.S. is running low on gasoline on the West Coast and in the Midwest, where prices are surging on...