Congressional policymakers formally kicked off negotiations on comprehensive legislation meant to facilitate domestic production of semiconductors and improve the movement of freight at ports.

Lawmakers engaged in the negotiations met May 12 to finalize the freight-centric legislation. At issue are provisions tucked in House- and Senate-passed bills authorizing more than $50 billion for semiconductor chips.

These measures include the U.S. Innovation and Competition Act, or USICA, which would specifically seek to enhance programs at the Energy Department. Aspects of the Ocean Shipping Reform Act are likely to gain approval during the negotiations. That bill takes aim at the Federal Maritime Commission by requiring carriers to issue certain reports to the commission each quarter. It also would pave the way for the registration of shipping exchanges.

The congressional negotiations are referred to as conference committee meetings. A final legislative version is expected in the coming weeks.

“Every member of this conference committee should recognize the urgency to bolster our supply chains, boost American manufacturing and unleash the next generation of technological innovation,” said Sen. Maria Cantwell (D-Wash.), chairwoman of the Commerce Committee, who is tasked with organizing the final bill. 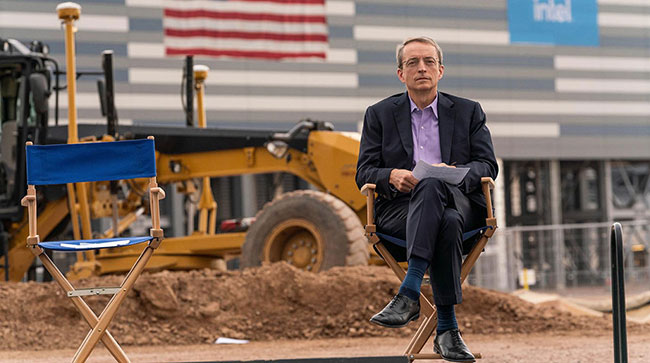 Intel CEO Pat Gelsinger at the groundbreaking of two chip factories at the company’s Ocotillo campus in Chandler, Ariz., in September 2021. (Intel Corp.)

“There is no time to waste and I look forward to showing the American people that we can deliver this important legislation as soon as possible,” Cantwell added.

House leaders involved in the negotiations have expressed a sense of urgency. “Our bills were built from the ground up with rigorous input from the scientific community on what they need most to succeed in the 21st century. They will bolster our nation’s competitiveness and reaffirm our global leadership in innovation and technology,” Science, Space and Technology Committee Chairwoman Eddie Bernice Johnson (D-Texas) said.

Republicans participating in the negotiations have indicated they will seek to promote domestic oil production.

At the White House, President Joe Biden and his senior staff have applauded Congress’ efforts to dedicate about $50 billion in new funding for semiconductor manufacturing. “A significant interruption to our supply of semiconductors could cause historic damage to the U.S. economy, damage far greater than the impact of chips shortages on the American auto industry right now, and would undercut our technological competitiveness and military advantages over adversaries globally,” according to background from the White House. “The House and Senate have each passed bills to make historic investments in research, domestic manufacturing and America’s capacity to make semiconductors.”

Last month, Commerce Secretary Gina Raimondo urged senators to finalize the freight package. “I cannot say strongly enough the urgency with which we must act. Other countries aren’t waiting for us,” the secretary told senators. “China has invested $150 billion. Germany, Singapore, Spain, France are all investing.”

Industry stakeholders also have been calling on Congress to finalize the supply chain-centric bill focusing on semiconductors. “American businesses in every sector across the economy are facing a semiconductor shortage, and the only way to alleviate the current supply-demand imbalance long term is to increase manufacturing capacity,” Intel Corp. CEO Pat Gelsinger recently told the Senate Commerce Committee.

WASHINGTON — The U.S. House moved urgently to head off the looming nationwide rail strike on Nov. 30, passing a...

The lorry combines all the input from the various sensors with a GPS system Jonathan NACKSTRAND Text size Pictures by...

The top bosses at Kroger Co. and Albertsons Cos. are headed for a round of tough questions from U.S. senators...

President Joe Biden plans to call on Congress to act to stop a looming shutdown of the nation’s freight railroads,...