To the truckers aiming to qualify for the National Truck Driving Championships this summer, a state tournament’s driving portion might seem the most significant.

It’s understandable why a state competitor would be fascinated by the thrill of maneuvering a truck along a challenging course as home fans cheer on. But, there’s more to a state qualifier than showcasing one’s safety driving skills.

Away from the bright lights and the spectators are two sections of a state qualifier that are equally significant — the written test of the industry’s rules and regulations and a pre-trip inspection of a specific truck class, such as 3-Axle or Tank Truck. 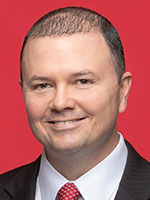 Strong performances at both disciplines, along with sound driving, are the ingredients that help to determine a competitor’s outcome at their state qualifier, National Truck Driving Championships committee Chairman Jason Wing told Transport Topics.

For drivers seeking to qualify for nationals, Wing recommends: “Be prepared as you can be, but don’t take it too seriously at the same time. So, the material is available to them to study.”

To qualify for NTDC, referred to as the “Super Bowl of Safety,” a trucker with a safe driving record must win their vehicle class at a state tournament. Already, drivers from around the country have begun to qualify for nationals. Others will soon have an opportunity to punch a ticket to the main event. The last state tournament will be held July 9 at Tacoma, Wash.

“Most people think that the only part of the competition that really gets you in the winner’s circle is what happens on the course, which is the most visible part of the competition; it’s the most exciting. But I would tell you that the competition is often won or lost in the back room, if you will,” Wing emphasized. “So the written test and the pre-trip inspection are so important. So I would just make sure, and my advice would be, to be well-rounded in your preparation and not focus solely on one area of the competition because it will take all three parts to get you into Indianapolis.”

This year’s NTDC, which was paused during the height of the pandemic, will be held in Indianapolis Aug. 16-20. For Wing, the national forum is a momentous venue for professional drivers to connect and celebrate a culture of safety. The competition, he said, has a sense of unpredictability, which contributes to the excitement and festive atmosphere.

The national event also is a place for individuals to share in a sense of belonging to an industry passionate about highway safety.

“It’s about an industry coming together, but for me it helps manifest that sense of pride in what they do,” Wing said. “And for a driver to ever feel like the job they do is not extremely important, it’s something that it’s unfortunate.”

The tournament also transcends the scoreboard through its high level of professionalism.

“So, I think it elevates or enhances their feeling of pride in the job they do,” Wing added, “and at the same time they get to engage in a community that’s much bigger than the company they work for.”