Gasoline pump prices have risen above $4 a gallon in all states in the U.S. for the first time ever as the last holdouts — Kansas, Oklahoma and Georgia — saw prices rise overnight, according to auto club AAA.

In California, the most expensive state, prices are averaging $6.021 a gallon, a fresh record, while five other states are above $5 a gallon. Ever-higher prices less than two weeks before the start of peak summer driving season are a burden to consumers and a potential challenge for President Joe Biden. His decisions to release crude oil from emergency reserves have translated to little relief at the pump, in part due to a lack of refining capacity to process that crude.

It’s too early to know how this latest increase will impact drivers or their summer travel plans, said Ellen Edmonds, a spokesperson for AAA. Historically, people still take planned trips, but find other ways to offset the higher prices at the pump, Edmonds told Bloomberg in an email. 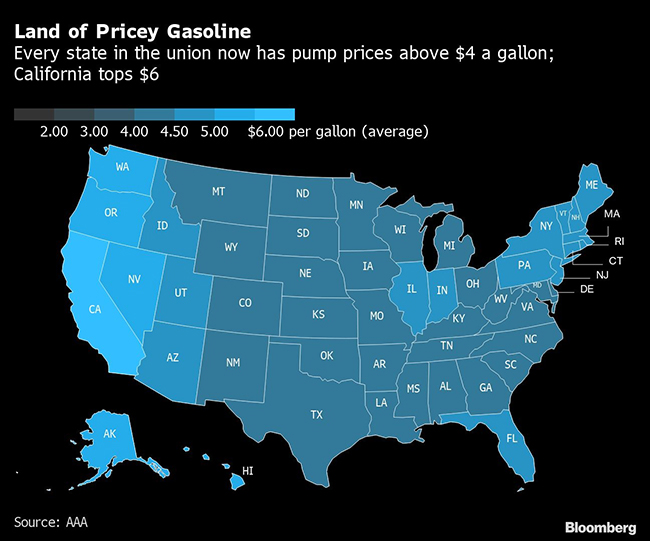 The burden of high pump prices falls most heavily on lower-income families who spend a bigger portion of their earnings on fuel, and they are less likely to drive electric cars, said Mark Finley, a fellow at Rice University’s Baker Institute for Public Policy, in an interview earlier this month.

The average U.S. household will spend about $450 more on an inflation-adjusted basis for gasoline this year compared with last year, according to a government forecast this month. But higher wages mean gasoline expenditures as a percentage of disposable income remain only slightly above the average since 2015, the report said.

A handful of financial and physical metrics — including low fuel stockpiles — suggest pump prices are likely to rise further this summer.

— With assistance from Sophie Caronello.