Polson man in custody after homicide near Flathead Lake


A Polson man is in custody in the Lake County jail following a homicide the night of Tuesday, May 10 in a Tribal wilderness area along the east shore of Flathead Lake.

Tyler Uhrich, 20, faces charges of deliberate homicide and criminal endangerment, both felonies. Uhrich is a suspect in the death of Rozlyn Bluemel, 22, also of Polson. Uhrich and Bluemel share a child.

Charging documents suggest Uhrich shot and killed Bluemel in the Hell Roaring Canyon area, then fled on foot, leaving the couple’s 2-year-old child alone in a vehicle on a rural forest road in freezing temperatures.

According to authorities and witness accounts, Bluemel was in a pickup with a male friend the night of May 10. They were driving in the remote area, and another female was following in her own car. The vehicles were briefly separated and were on different spur roads when the female saw Uhrich arrive in his vehicle. Uhrich had not been invited or expected. He asked where Bluemel was. The female said she didn’t know and didn’t want to tell him because she feared for Bleumel’s safety.

Uhrich apparently knew where the truck was located, and he and the female drove their vehicles to that location, where Uhrich confronted the male and Bluemel, who were inside the truck. He pounded first on the passenger-side window, and then on the driver-side window.

As the driver attempted to pull away, Uhrich jumped into the back of the truck. The male driver reported hearing what sounded like a gunshot. Bluemel exited the truck, and the male drove away. He said the last thing he saw was Uhrich and Bluemel heading toward Uhrich’s car, and as he was driving away with his window open he heard three additional shots fired.

After hearing gunshots, the female, who had been parked up the road, drove toward Uhrich and Bluemel. She reported seeing Bluemel on her back on the ground. Uhrich turned his attention to the vehicle, and Bluemel took the opportunity to escape into the woods. Uhrich followed her.

The female reportedly attempted to call Bluemel’s phone. She also called the male driver to see whether he had seen Bluemel. Uhrich then emerged from the woods, banged on the car’s window, then walked toward his car.

The female then called 911 to report a domestic disturbance and drove down the road to meet responding law enforcement officers.

When authorities arrived at the scene, they did not initially locate Uhrich or Bluemel, though they did find the couple’s child, who was left alone inside Uhrich’s vehicle. Responders also found two loaded 9mm Sig Sauer magazines and a shotgun inside the vehicle. Authorities also found several shell casings along the roadway.

A crew from Two Bear Air was called in to help search for Uhrich and Bluemel. The following afternoon authorities found Bluemel deceased in a heavily wooded area near the initial incident, and a warrant for Uhrich’s arrest was issued. Court documents suggest the cause of death was a gunshot to the head.

Authorities searched for Uhrich for two days before detaining him Friday night in the Pablo area. 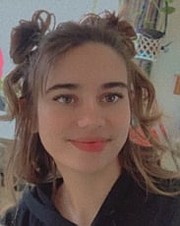