LONG BEACH, Calif. — The leaders of Volvo Trucks North America and Navistar expect broader competition when it comes to delivering electric trucks to customers, and even closer collaboration with more parties to ensure such trucks are ready to work, they said in separate interviews with Transport Topics.

Each spoke with TT during the Advanced Clean Transportation Expo 2022 May 9-12.

Navistar President and CEO Mathias Carlbaum said it was very important all truck makers head in the same direction with battery-electric vehicles to start (which would help expand the needed charging infrastructure), but then it comes down to “how we differentiate the future.” 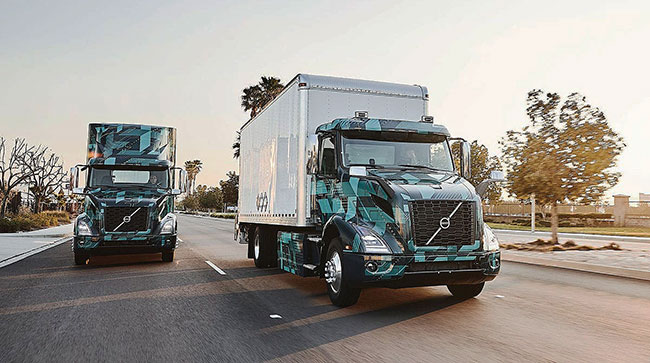 The overall philosophy with which you approach truck building is key, according to Peter Voorhoeve, president of Volvo Trucks North America.

“We are very focused on sustainability, care for the environment, safety and quality. That’s how we design our trucks,” he said. “That goes the same for diesel trucks as it does for electric trucks.”

“We see that also in the LIGHTS (Low Impact Green Heavy Transport Solutions) project,” in California, he said.

That project began in 2019 and demonstrated the ability of heavy-duty, battery-electric trucks and equipment to reliably move freight between the state’s two major ports. Volvo was the sole truck maker involved. Volvo also was the first vehicle manufacturer to produce seven CO2-neutral demonstration trucks in 2007. And the only truck maker approved to participate in the World Wildlife Fund’s Climate Savers program.

“We see now customers calling saying ‘I want to talk with you, do business with you’ that previously, maybe, were very difficult to get at,” Voorhoeve said.

Carlbaum thinks differentiation between truck makers will develop around batteries and the chemistry they use. “That will be part of the secret sauce.”

And the pace of change is quickening.

Carlbaum described the current environment as more competitive than the one where truck makers sell into the market for diesel-fueled trucks.

The expo’s expanding constellation of suppliers and new truck makers seeking a role in a future with new transportation fuels drew 8,500 registrants to ACT Expo, compared with 5,000 last year.

Software will play a key role — and require new partnerships — and the data from software and truck-related capabilities are what will be packaged to create value for customers, Carlbaum said.

With electrification, a Navistar dealership’s responsibility for guaranteeing uptime will only increase in importance, he said.

“In an electric vehicle where the asset value is even higher [than diesel trucks], I think uptime becomes more important. If you are able to give 3-4%, whatever, more of uptime because of the product and the adjutant services, that’s a deal maker,” Carlbaum said.

“That’s when the whole landscape changes. And the ecosystem of logistics and mobility becomes a new playing field,” he said. “What is our added value in this new logistics chain? That’s really where competition lies in the future, and there is going to be more of it.”

In March, Navistar opened the doors at a new $250 million truck manufacturing facility in San Antonio. The first truck off the assembly line — for diesels, too — was an electric International eMV. The trucks are available in Classes 6-7, which are used heavily by truck leasing companies that are the largest buyers of commercial vehicles.

“What’s ahead of us now,” he said, “is moving so much more from a business transaction into a relationship,” certain to involve Navistar’s NEXT eMobility Solutions team to ensure seamless integration of electric vehicles into customer fleets.

Carlbaum, speaking at the new factory, said over the next 10 years in transportation so much more will happen than in the last 100 years.

Voorhoeve said the company’s own “fairly primitive methodology” showed VTNA had a 48% share of U.S. electric vehicles on the road. “It’s low volume, but we strongly believe that this transition to technology, and by being first out, will have a positive effect on our market share ultimately. We are the market leader in Europe as well.”

But with an electric truck, especially since they are so new, it’s more than the product alone, Voorhoeve said. “It’s how do we deal with the customer, the aftercare, and take a consultative approach.”