Start of the mini-Field School


Start of the mini-Field School

I am in Bangladesh this time to collect magnetotelluric (MT) data.  This electromagnetic method can look deep underground to help image the sediments and faults beneath the surface.  It will help us assess the earthquake hazard in this densely-populated country. Deploying an MT station consists of laying out electrodes in the north-south and east west direction 50-100 m apart and burying magnetometers pointing north, east and vertical.  Struggling with cable-biting rats and foxes, and interference from ubiquitious power lines, we have learned the hard way that tea gardens with buried cables are the most successful way to collect good data. 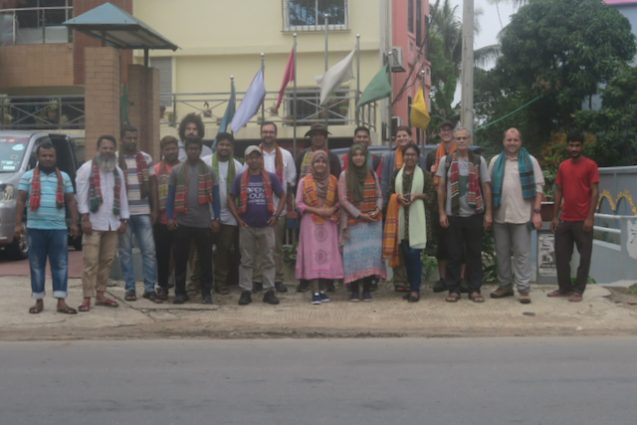 We pose in front our our hotel for a group photo (minus Arman taking the photo). From the left, Ruven,Babu, Sumon and Shofique, the drivers, Oliver, Biplab, Masud, Shofique, Samer, Rashed, Fayima, Liza, Mohibul, Anna, Tomolika, Alex, me, Paul and Shipon, the truck driver.

Now, we are entering a new phase of this trip.  We have added to more students and professors to our team and will conduct a mini-Field School in conjunction with the deployment.  COVID derailed our plans for a full Field School, but we are managing a smaller number of students and using the funds saved to support the MT deployment.  We have 4 U.S. students from 3 universities and 7 Bangladeshi students, also from 3 different universities. Teaching, we have 3 American and 2 Bangladeshi professors, all from different places.  We will be traveling around in 4 vans and currently are storing our equipment in a small truck. 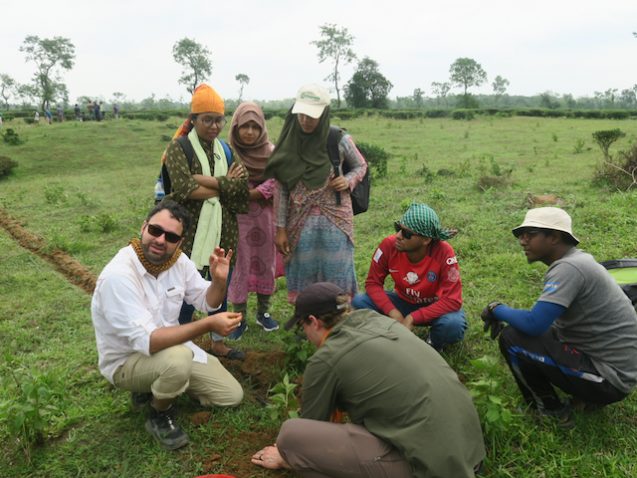 Samer explaining how to deploy an MT site to the new students.

For the first day, we took everyone, minus the US student who missed his flight, out to deploy an MT site.  Half of us are now very experienced at deploying MT, whole the newcomers shadowed us to learn how to do it.  Finishing before 1pm, we decided to do to the nearby Hum-Hum waterfall in one of the anticlinal hills.  After some preparation, we started hiking in with a guide.  The forest was beautiful and surprisingly noisy.  After crossing several streams on bamboo bridges the trail started becoming more vertical as the day heated up. 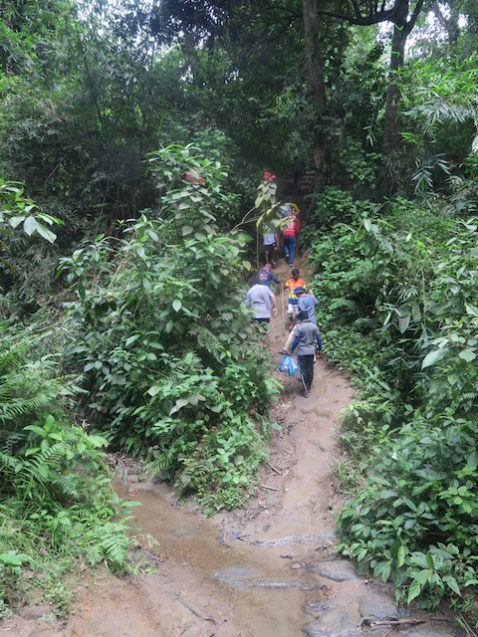 Our group heads into the forest trail to Hum-Hum Falls.

A few of us decided to turn back after realizing that it would take another 1.5 strenuous hours to reach the waterfall.  We headed back and look the late arriving student to a very late lunch. Some of the others turned back near the top of the anticline when thunderstorms could be seen approaching. The remaining few made it all the way to the falls.  All but my first group got caught in the downpour and needed to carefully make their way back down the mountain.  A number of people got leeches as well. 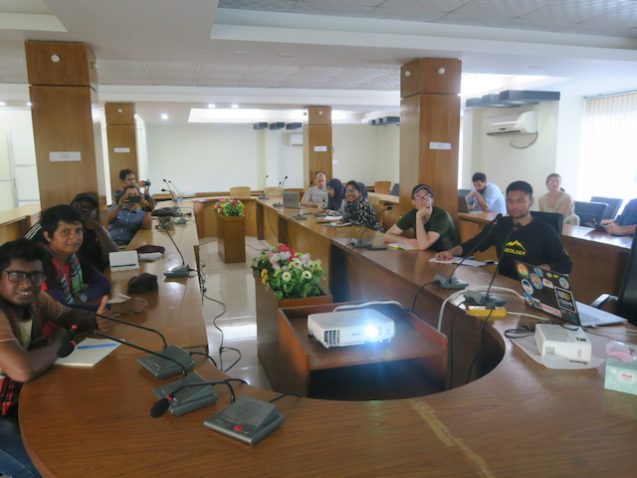 We assembled in the conference center of our first hotel for the initial lectures.

The following day, the lectures got underway. During the morning, I presented an overview of the history and tectonics of the region and why we are doing MT.  Then Samer presented an overview of what MT is and can do.  Following lunch, we changed hotels from Tea Heaven to the Tea Museum at the beginning of the hills and tea gardens.  The Tea Museum has multiple bungalows of several rooms, which nicely promotes mixing of the participants.  The pool is also a good place for socializing.  There are also more extensive grounds.  We eat our meals in a temporary screened in tent, which is almost like eating outside.  There is a monkey that wonders the grounds.  I share a bungalow with Paul and the students Alex and Martin.  Since our bungalow has the largest living room, this is where we are doing presentations.  Later in the afternoon, one group went out to retrieve an MT station, while the rest of us settled in. 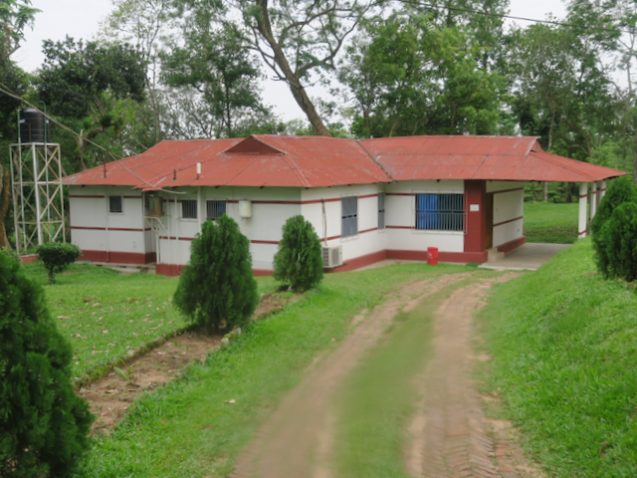 My bungalow, which also doubles as our lecture hall. 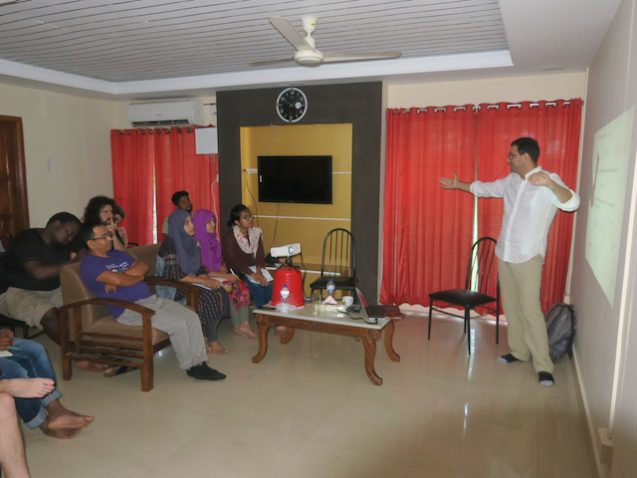 Samer explaining the MT method to an attentive audience in our living room.

The next day, we spent the morning in the more detailed on the MT method by Samer and regional geology by Paul.  After lunch, we split into 3 groups.  Samer lead a group scouting for sites far to our east and visiting geologic outcrops. Oliver led a group retrieving a nearby MT site.  I lead half of the people to visit one of my GPS sites. After arranging access to the school’s ladder, we went up to the roof, where the equipment is.  I explained the setup and downloaded all the data since Sanju and I were last here.  The data telemetry for this site is not working.  Next month, Sanju will come here with parts I brought to repair it.  Meanwhile I can use the site for a demonstration.  By the time we finished, the MT group was done, but we still went to the site simply because it is the most beautiful of our deployments, with a 1-km walk through hills covered in tea to get to it. 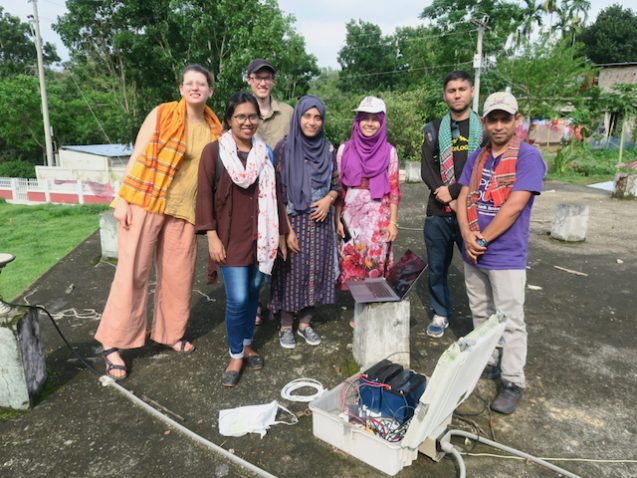 Anna, Tomolika, Alex, Liza, Fayima, Mohibul and Shofique on the roof while the GPS data downloads to my laptop. 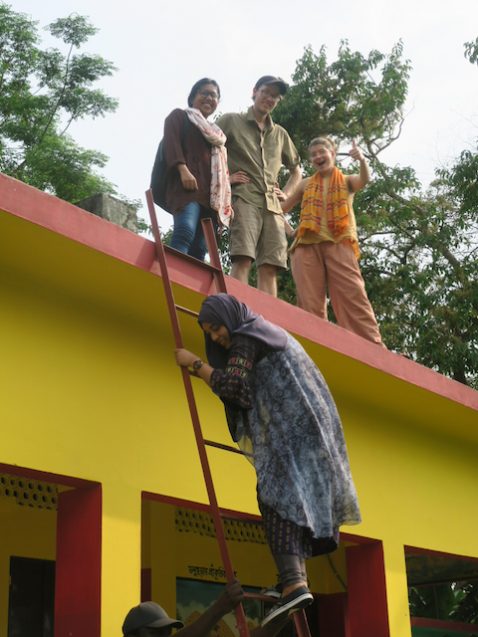 Liza climbs down the ladder from the roof while Tomolika, Alex and Anna wait their turn.

After we returned, Shofique, Oliver and I did some scouting locally.  We need a site to do a deployment with the Field School in case the other team did not find a site.  We returned in time for me to visit the pool to cool off after the hot roof.  The other scouting team didn’t arrive back until close to 9pm bearing jackfruit and pineapple.  They had found a potential site. 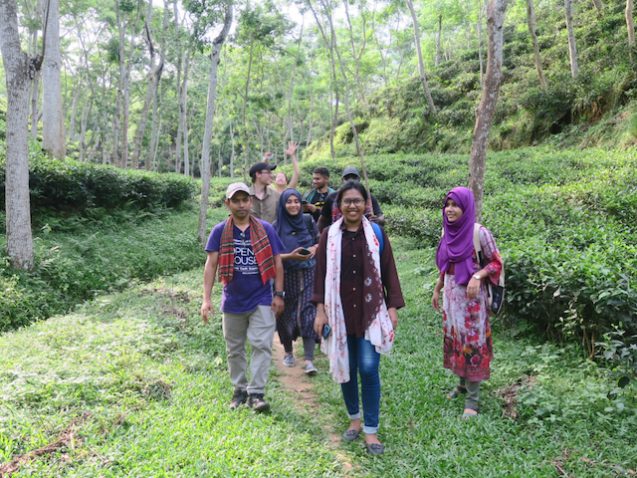 Our group walking through the beautiful tea garden to the MT site.

The site was in an anticline about 2 hours to the east.  We left early and got breakfast on the way.  Paul, with Rashed’s assistance led the students through the geology while they all made measurements of the strike and dip of the strata.  We could see the geometry of the beds change as we progressed through the anticline, including very steeply dipping beds and deformation bands of crushed rocks.  They did a great job and really engaged the students.  After a break for lunch, we were ready to deploy in a tea garden in the middle of the anticline, until it started raining. 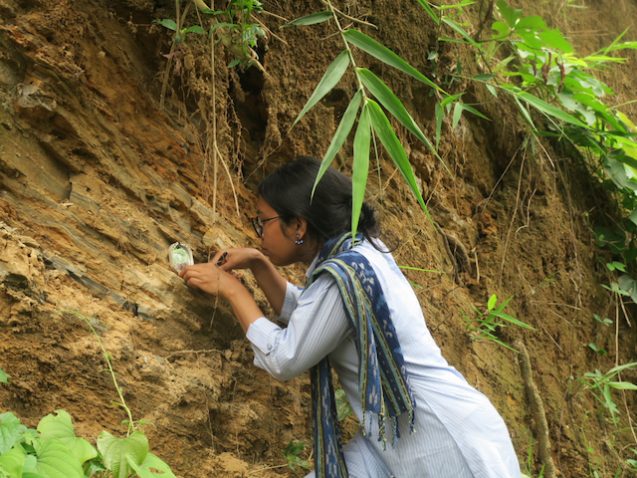 Tomolika measuring the strike and dip of the beds in an exposure along a road cut.

Deploying electrical equipment in a potential thunderstorm is never a good idea and we went back instead.  In the evening Paul was able to continue his next set of lectures.  The morning was also rainy, so it became a classroom day. We started with Samer completing his lectures on the MT method and how it works.  Then, using the measurements the pairs of students made, Paul led then them through the first steps of the analysis, and I leant my computer to assist some of the teams.  After lunch, Samer, Paul and Oliver left to return to the U.S.  As the long-period (LP) instruments are leaving with him, we no longer need the truck that is with us.  After they left, Alex, Paul’s student continued the instruction.  As we continued, a complete analysis proved too ambitious, but the students still got the gist of the structural analysis. 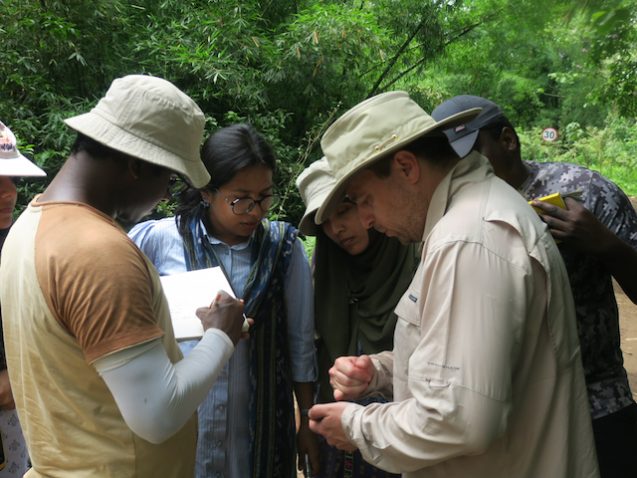 Paul explaining how to do the measurements and how they are used to determine the structure of the anticline.

That night we got a call that one of our MT receivers had been stolen.  A group of us immediately went to the police to file a report.  Then, after a scant 5 hours sleep, we went back to the police station and then went to the site with them.  Whoever did it unscrewed the magnetometer cables, but snapped the string holding the cap, so at least we didn’t have more cut cables. We found one of the two batteries ~100 m south of the sight and farther along, we found the other battery under a tea plant.  They must have been too heavy to carry. Still, no trace of the expensive receiver.  We suspect teenagers, as adult thieves would have certainly taken the valuable batteries and carried them easily, and a teen was seen there the day before.  We learned that there were only 3 guards taking turns instead of 4, so that there was a few hours gap between the day and night guards. 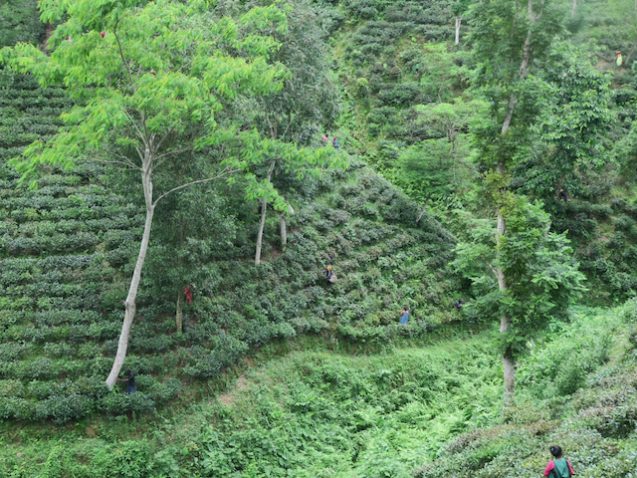 Tea pickers working in the fields near where were doing our structural cross-section.

After packing up the remaining equipment, we met local officials and the townspeople who will mobilize to find our equipment.  The guards refused payment for their time until the receiver is found.  After a while Shofique and I went back to the Tea Museum, as without Bangla I could not help beyond showing some pictures of the receiver. Rashed and others stayed to keep the search going. The local police initiated a house-to-house search.  Everyone there is motivated to find our stuff, which is quite heartening.  We are hopeful that it will turn up. 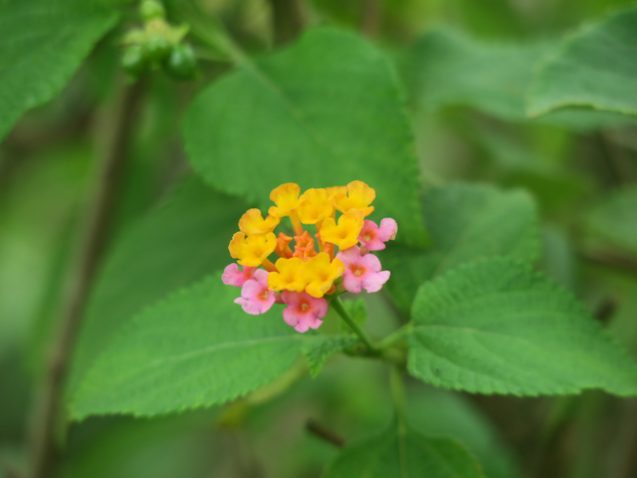 A beautiful and unusual multicolored flower by the side of the road.

In the morning, we were driving to the police station to finish filing out report when word arrived that the receiver, nicknamed Chinstrap, had been recovered.  After picking up the policeman, we headed to the site.  The receiver had been left anonymously by the hospital in the early morning.  However, when I examined it, the SD card with all the data was missing.  The village will continue searching to recover the SD card.  We headed back semi-satisfied. 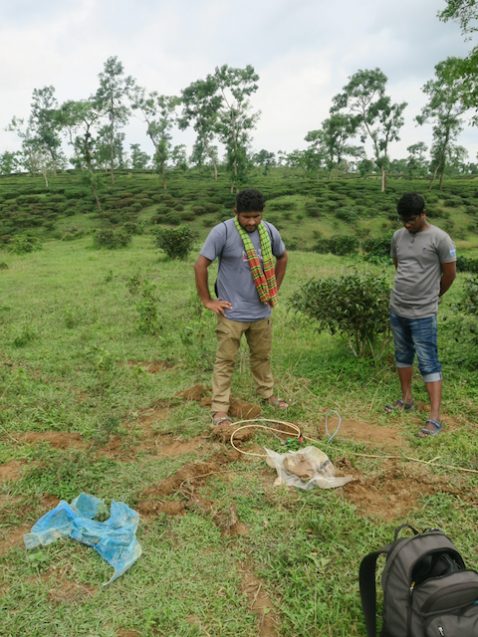 Masud and Biplab staring at the site were our receiver used to be.

We lost 1.5 days of the Field School due to the lost receiver. We completed our time in Sremongal with me lecturing about my GPS work here, then we went to the Monipuri Market for 7-layer tea, a local specialty where teas of different densities are layered in a glass, and shopping. Tomorrow we drive north to the Sylhet anticline near Sylhet City for more geology, lectures, and hopefully some last MT stations. 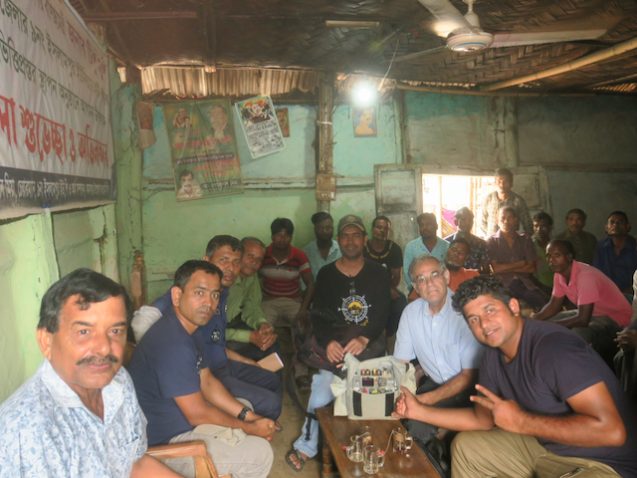 The local chairman, Shofique, the policeman, Rashed, myself and Masud with the recovered MT receiver.