Hydrogen Likely to Be Next Fuel for Trucking, Panelists Say

LONG BEACH, Calif. — Hydrogen fuel cells are being adopted in transit fleets, and motor carriers are poised to be next — and ultimately see a price at production comparable with diesel, experts said. 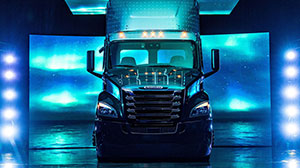 The purity of the hydrogen is ultracritical for fuel cell applications, Bateman said, and gaseous hydrogen has to be purified by special processes and sampled often — all of that costing a lot of time and money.

“Once hydrogen goes into liquid format, it is extremely pure,” he said. “I do believe the long-term future will be liquid hydrogen, especially in commercial vehicles.”

Titusville, Fla.-based GenH2, which consists of former NASA scientists, formed about 18 months ago at the request of the Department of Energy, Bateman said.

The bipartisan infrastructure law includes $8 billion for at least four regional clean hydrogen hubs — at least one producing clean hydrogen from fossil, one from nuclear, and one from renewables.

DOE launched its first Earthshot initiative June 7, 2021, to reduce the cost of clean hydrogen by 80% to $1 per kilogram (at point of production) in one decade.

According to the Rocky Mountain Institute, hydrogen has almost three times the energy density of diesel or gasoline. Others noted last year in California hydrogen cost about $13 per kilogram; diesel fuel was only about $3.25 per gallon in the U.S. at the time.

“The cost of hydrogen fueling will come down tremendously with tremendous investment and scaling. That’s what we need to see here. It is going to look just like it does today in traditional transportation fueling,” said Eric Guter, vice president of hydrogen for Air Products.

Meanwhile, the infrastructure that has been built for the transit space has helped the trucking space in terms of lessons learned, said Kim Okafor, general manager of zero emissions for Trillium, which is a part of the Love’s Family of Cos.

“So we need to increase it for trucking and think through compression and pumping,” Okafor said. “Also, a bus takes 25-30 kilograms in the tank where a truck would take 60 kilograms. That’s a lot more fuel [that needs to be supplied].”

At the same time, Trillium needs to work hard to understand the choices coming in the next several years, she said.

“If I were to put in a hydrogen fueling station at a truck stop today, it would have a high-pressure, high-flow gaseous orientation, and it would require a significant amount of investment,” Okafor said. “If that technology evolves into also liquid hydrogen, then that station changes and it takes a whole other round of investment.”

Cummins Inc. reported it is working on both — a fuel cell that converts compressed hydrogen gas to electricity, and hydrogen engines, internal combustion engines that burn hydrogen as the fuel.

What’s heavy-duty, runs on hydrogen, and is driving us towards zero-emissions transportation? The newest truck collaboration between @Cummins and @DaimlerTruckNA! #Cummins #fuelcells #heavydutytrucking https://t.co/QQR0x7JYFD

Cummins announced at ACT Expo it will supply market leader Freightliner, a brand of Daimler Truck North America, with a hydrogen fuel cell powertrain for validation in the heavy-duty Cascadia model,

To spur demand, one truck maker is offering a bundled lease that includes the truck, hydrogen fuel and maintenance.

“Being able to offer a customer a very integrated solution on a very predictable type of payment allows us to take that leap to go into this technology,” said Pablo Koziner, president of energy and commercial for Nikola Corp. “If we do a great job, maybe that’s a standard in the future.”

Nikola’s first version of the truck will be gaseous hydrogen, he said. It is scheduled to be available as a day cab in 2023 and as a sleeper model a year later.

“But the utopia of this is you produce hydrogen then liquefy it, and it’s liquid the whole way through the supply chain,” Koziner said. “We are watching this tech very carefully and are ready to shift when that happens.”