Most truck drivers would likely call it a bad day when a Maryland state trooper places them out of service for a pair of violations on the first day of a three-day stepped-up law enforcement International Roadcheck inspection operation.

Not “Matthew,” a 50-year-old driver for a large moving company, who was waiting for a tire change after he accidentally drove past the scale at a weigh station located near the I-495/I-95 split in Prince George’s County, Md. He irritated a trooper, who flagged him to the side of the road and issued a violation for “breaking a local law.”

“It’s actually a good day,” he said. “I turned down a job in Brooklyn today. This ain’t bad at all. The job would have called for a box truck and several days of trips.” 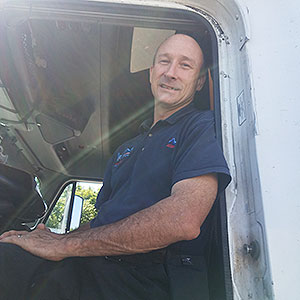 Now, he’s headed for a moving gig, picking up a load nearby and taking it to South Central Texas — not too far from his home in Killeen, Texas, which will also allow a visit soon with his wife and nine children.

The trooper also issued Matthew a violation for a gash on a tire on the front passenger side of his tractor.

“Sometimes we miss something, like I did today,” Matthew said. “It was a problem I didn’t see until the officer saw it. I haven’t had a problem like this in many years.”

Most of the hundreds of truckers who passed through the scale at the weigh station on May 17 were more fortunate — allowed to bypass a Level 1 inspection.

Today, at the start of @CVSA #InternationalRoadcheck, Member Graham & staff observed inspectors as they examined CMV vehicles in Maryland. Inspectors are critical to keeping our roadways safe; they play a key role in ensuring the safety of all commercial vehicles. pic.twitter.com/GlGeZfDCLO

During the special operation, trucks are stopped for inspection on a random or visual basis, or more often are flagged for an inspection after a pre-screening process identifies them as having bad safety scores. 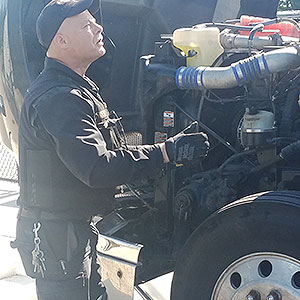 An inspector checks out an engine at an International Roadcheck law enforcement event in Maryland on May 17. (Eric Miller/Transport Topics)

Department of Transportation inspectors and state troopers across the United States, Canada and Mexico have been performing 72-hour Roadcheck inspections for 34 years, said Collin Mooney, executive director of the Commercial Vehicle Safety Alliance. “It has evolved into a more concentrated national effort on promoting roadside safety, promoting vehicle maintenance and making sure drivers are operating in a safe way. But it’s really pretty much what we do every day.”

This year’s focus is on wheel ends, all of a tire’s components.

“When we’re stopping a vehicle for a regulatory inspection, if we’re finding violations, the driver probably has a failing pre-trip practice, or the motor carrier has a failing preventative maintenance or annual inspection program. There are a number of violations that we see that didn’t happen within the last few hours, such as a flat tire.”

The number of inspections varies due to locations and numbers of trucks passing through the scales, Mooney said.

Although the event no longer has official kickoffs, several CVSA officials and regulatory officials from the Federal Motor Carrier Safety Administration and the National Transportation Safety Board were on hand to observe the Maryland operation. 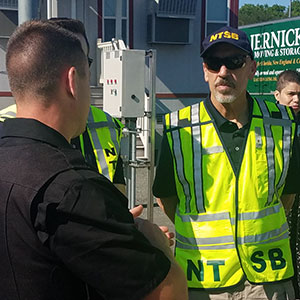 “We’re just out here today to better understand the CVSA road-inspection process, to get a better understanding of what they’re identifying as hazardous issues on roadways with commercial vehicles, and better understand how they’re trying to correct these issues,” said Michael Graham, an NTSB board member who has expertise in aviation mishaps.

“FMCSA also brought their technology people out today, and we have a better understanding about how they do it all by data,” he said. “We don’t go to a lot of crashes every year. There’s over 7 million crashes a year. We’re a very small agency, and have a very small highway department. So we have to be very selective about which ones we can get to.”

One forlorn-looking driver from Florida cited for a bald trailer tire said he did a pre-trip before heading out on the highway, but didn’t see it.

“He didn’t do a pre-trip this morning,” Mooney said. “A tire doesn’t get bald in a day.”