“It certainly highlighted in a real tangible way how integrated our economies are,” Alghabra told The Detroit News. “We all knew that intellectually, but we felt it when the Ambassador Bridge was shut down how dependent both of our nation’s jobs are on the free flow of goods between our two countries.”

A protest over COVID-19 restrictions and a trucker vaccine mandate halted traffic on the bridge, which connects Detroit to Windsor, Ontario, drawing international attention and significantly disrupting international trade. 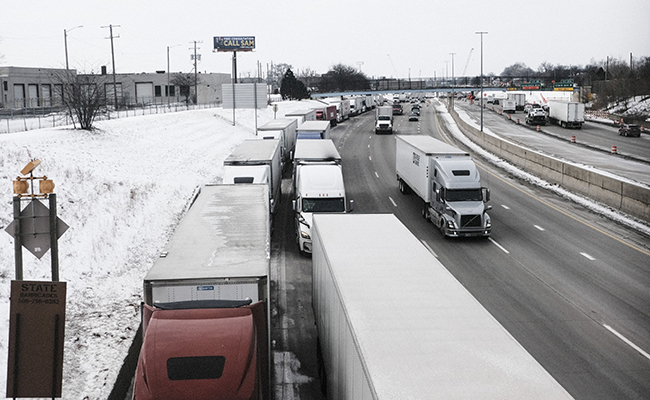 Trucks wait on Interstate 75 in Detroit on Feb. 8 for the reopening of Ambassador Bridge. (Matthew Hatcher/Bloomberg News)

The bridge is the conduit for around 25% of all trade between the U.S. and its northern neighbor and is a major supply route for the automotive industry. By some estimates, the auto industry lost nearly $300 million in wages and production during the bridge shutdown.

The two transportation leaders talked about how important it is to continue work on the Gordie Howe International Bridge, which has been under construction since 2019 and is expected to open to traffic at the end of 2024, Alghabra said. When completed, the bridge will offer a publicly owned alternative to the privately owned Ambassador Bridge.

“That bridge will offer an important link between our two economies that will add redundancy and resilience to that trade corridor,” he said. “There’s always room for figuring out what other red tape we can cut, how we can harmonize the flow of goods. So we discussed those as well.”

Alghabra came to Washington to talk with Buttigieg about solutions to supply chain issues and the countries’ responses to Russia’s invasion of Ukraine, the Canadian official said. He also met with members of Congress, the CEO of Amtrak and White House Senior Adviser Mitch Landrieu.

International supply chains have been under stain throughout the pandemic, as shortages and disruptions across the globe repeatedly impact production elsewhere. It’s prompted a renewed focus on reshoring or “ally-shoring” manufacturing of critical components such as semiconductor chips, a shortage of which has caused billions of dollars of losses to the U.S. economy.

Buttigieg’s office did not immediately respond to a request for comment on the discussion May 25.

U.S. railroads have begun curtailing shipments of hazardous chemicals ahead of a potential nationwide strike by workers, according to a...

On Tuesday the City of Gering’s Public Safety Committee met to discus changes to the cities current ordinance for truck...

A proposal by federal regulators to require unique electronic identifiers on large trucks wasn’t well received by many of the...

The man was driving south on J. Davis Road in Haralson County around 11 a.m. when he came to a...

PHOENIX (3TV/CBS 5) - Three members of the same family are dead after a rollover crash on I-10 near Casa...