Google Takes Another Run at E-Commerce, and Amazon

Google executive Prabhakar Raghavan recently had an issue with his rose bushes. His wife took a photo of the plants on her phone, uploaded the image to Google, identified the culprit and followed a link for a fungicide. Then she bought it.

A seamless transaction that didn’t involve typing into a search bar, it was a real-life test of sorts for Raghavan’s strategic vision. A senior vice president responsible for most of Google’s largest services — search, maps, advertising and more — the 61-year-old executive is determined to crack e-commerce, a market projected to hit $2.27 trillion in 2025 that the Alphabet Inc. division has tried and failed to figure out many times before.

In the past, Google has tried emulating Amazon.com Inc.’s online retail and delivery services, with little luck. Now, under Raghavan, the search giant is positioning itself as a kind of anti-Amazon, a free marketplace for merchants and Amazon rivals that’s designed to get consumers more comfortable shopping with Google. 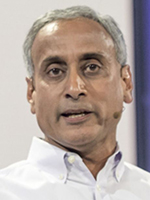 Earlier this month, at Google’s I/O software conference, Raghavan and his deputies demonstrated new features they hope will achieve that end, including one that lets visitors use photos to search for nearby retail products or find any item in the physical world with the click of a camera. And on May 24, the company unveiled a feature that lets people go from merchant listings on Google search to their checkout pages in one click. Raghavan hopes the various initiatives will persuade millions of people to click and buy, prompting sellers to purchase many more Google ads.

For Amazon, which built a booming business by essentially renting its digital real estate to small sellers, the risk is that Google could give those brands a pathway to thriving outside its marketplace. That in turn could force the Seattle-based company to more aggressively court sellers with discounts on fees, advertising or logistics services.

Still, Amazon remains a formidable rival, and Google confronts daunting challenges. Its renewed push into e-commerce coincides with a slowdown in online shopping as consumers revert to their pre-pandemic habits. Amazon and EBay Inc. both recently reported slowing growth and weak profit outlooks. Moreover, Google has always sought to make its technology fade into the background. Turning the site into a shopping destination risks wrecking the experience and alienating visitors. Ahead of the I/O presentation, Raghavan took pains to say shopping on Google would be “super smooth.” If the concept works as advertised, he said, shoppers won’t have to think: “‘Am I doing a search? Am I on Amazon or Google?’” 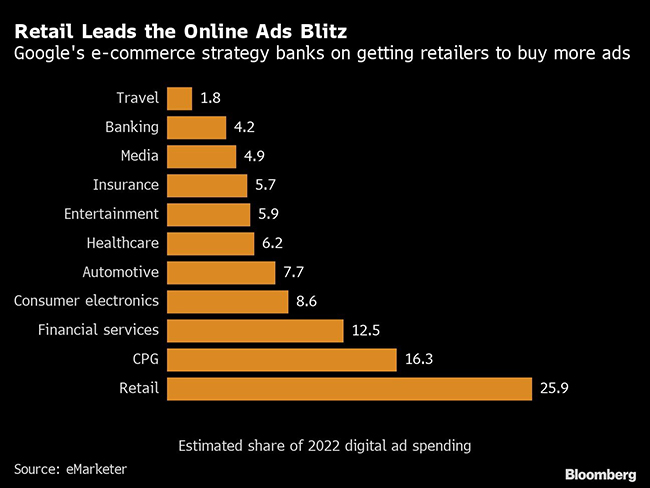 Meanwhile, even as Google tries to build an online shopping destination to complement its ad business, Amazon has done the inverse: created a robust advertising operation on top of its enormous online bazaar. Google’s success is hard to gauge because it doesn’t break out e-commerce sales or retail ads. Amazon’s is easy to see; its ads business posted 23% growth in the first quarter. “That seems to be working way better for Amazon than it is for Google,” said Mike Ryan, a portfolio strategist for Smarter Ecommerce GmbH.

Google’s last big e-commerce push involved going at Amazon head-on. In 2013, Google launched Shopping Express, a delivery service with a nifty app and a promise to ship many items on the same day. Google had huge retail partners on board, including Target Corp. and Walgreens, and planned an annual subscription model a la Amazon Prime. Back then, when quick e-commerce delivery was a novelty, Google’s service looked like a natural Amazon contender.

But it never was. Shopping Express expanded to a few cities outside of the San Francisco Bay Area, but had little appeal for consumers. Google’s “Shopping” site, accessible as a tab on its homepage, aggregated listings from online retailers with paid ads at the top, but attracted relatively few visitors compared with the main search page. Former Google employees say managerial indecision and an unwillingness to invest heavily in the margin-thin business undercut the strategy.

Then in 2015, Europe hit Google with a massive anti-monopoly suit that argued the search engine unfairly promoted its own shopping service over others. That forced the company to spin off the European business and move more cautiously. And Google eventually pulled the plug on Shopping Express.

Google dropped the commission it took for sales on its properties and the fees it charged merchants to list items on its shopping site, a signal to the industry that it wanted to be an open marketplace, not a competitor.

Talley & Twine, an independent watch brand based in Virginia, started getting serious about Google in the past two years and has sometimes seen a fivefold return on its ad spending. “It’s been a saving grace for us,” said President Randy Williams. The other benefit, he added, is that the search engine sends customers to his web store. “That’s the roadblock we have with Amazon,” Williams said. “Amazon’s customers are Amazon customers.”

Still, some industry insiders say Google’s biggest moves to create a marketplace — cutting commissions and listing fees for merchants — have yet to attract significant numbers of shoppers. When those changes were announced, some merchants braced for a big uptick in traffic and sales, said Ryan. “Then nothing happened,” he said. “I would describe it as nice, but low-impact.”

Kirk Williams, head of the online agency Zato Marketing, said Google’s fee adjustments didn’t alter consumer behavior enough to lure in more merchants. Not many more people visited Google’s shopping site, where merchants could list for free, and most eyeballs remained on the search page, where merchants still have to buy ads to get in front of consumers. “It hasn’t been anywhere near the traffic volume that they were hoping to see,” Williams said.

— With assistance from Ryan Gallagher and Nico Grant.