A shift in goods being swiped by cargo thieves indicates that criminals targeting the trucking industry are returning to pre-pandemic activity.

“We’re kind of back at a normal level — post the shutdown and the pandemic,” Keith Lewis, vice president of operations at CargoNet, told Transport Topics. “It’s still a big issue. And what I’ve seen in the last year is organized crews are really going after electronics, gaming, cellphones and those types of things. A couple of years ago the targeted loads were hand sanitizers and household cleaners. So, we’re seeing that shift back to what sells.”

CargoNet data shows thefts increased by 11 incidents year-over-year in January from 100 to 111, then dipped by one event to 95 for February. In March, the number of thefts decreased to 113 from 123 the prior year. 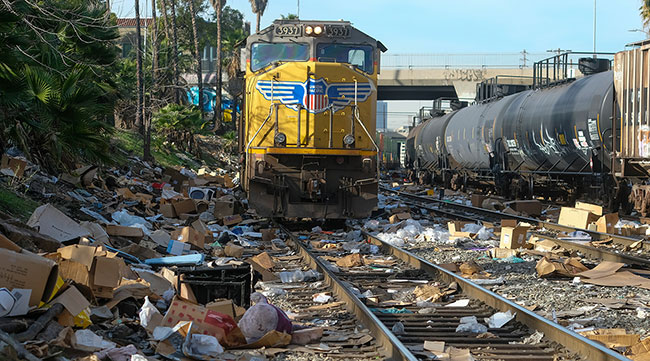 “The numbers for the first quarter in total are not that far off from what they were in 2021,” Scott Cornell, crime and theft specialist at Travelers, told TT. “While in some aspects they’re not as high as what we saw in 2020 — the height of the pandemic — they’re also not as low as they were before the pandemic.” He noted, however, that reporting of thefts plays a role in the numbers. Reporting isn’t mandatory, so statistics can sometimes be skewed.

Cornell said thieves are focusing on riskier but more valuable loads, and noted there also is an increased focus on full truckloads.

How thefts are planned is also becoming more sophisticated.

“We’ve seen an increase in what we would call organized cargo rings,” said Zak Bowyer, vice president of sales support operations at Total Quality Logistics. “These are the groups of people that will case a shipping location; they will watch trucks go in and out for days, they will pick their targets and then they will tail those trucks.”

Bowyer added that this growth in organized crime rings began late last year, and has followed the trend toward thefts of higher-value cargo. Cornell has noticed some regional differences in approach.

“We’ve seen some increase around auto parts, things like that,” he said. “We’ve seen targeting of high-end electronics that we saw toward the tail end of 2021 and continue into the first quarter of 2022. That’s going to raise the average value.”

Cornell also noted some strategic thefts have been emerging over the last six to eight months. These can involve identity theft, fictitious pickups and double brokering scams.

Supply chain visibility provider Overhaul, which uses its technology to help law enforcement track stolen goods, on May 10 reported that it recovered five shipments worth over $2.1 million over a 10-day span. These shipments were stolen by the same crime ring.

“We discovered some fraudulent tactics, stolen commercial driver’s licenses and fabricated carrier identities,” Danny Ramon, intelligence and response manager at Overhaul, told TT. “One of the things that was unique about this one is that they were playing what we call shell game tactics, where they’re actually moving freight out of one trailer into a completely different trailer.”

Ramon said these tactics make recovering and investigating cargo thefts much more frustrating, and noted they indicate a knowledge of the inner workings of logistics systems and trade. It’s also a tactic he doesn’t commonly see.

“It hasn’t really happened in any significant volume enough to be deemed a trend,” Ramon said. “But just to see it practiced so regularly by this particular crew, [it] seems like every load that they were stealing they were practicing this with.”

Ramon has also seen a continuation of high-value pilferages, which he attributes to both an increase in actual occurrences as well as more reporting. His law enforcement partners have seen rail cargo targeted more aggressively this year as well.