NASHVILLE, Tenn. — Roadrunner Vice President of Capacity Dave Renfrew was named recruiting professional of the year during an event June 3.

The Transport Topics Recruiting Professional of The Year award was presented during the 2022 Recruitment and Retention Conference. The honor recognizes trucking industry recruitment professionals who have gone above and beyond in attracting drivers. TT Executive Editor Joe Howard moderated a panel discussion.

“Last year was an epic year for us,” Renfrew said. “We had a lot of work to do. We went through a rebuild, we’ve also restructured our leadership, restructured our culture, and within recruiting. 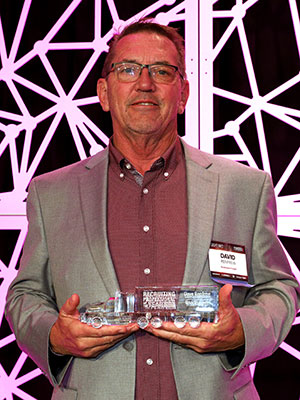 Dave Renfrew worked with Roadrunner’s advertising team to slash the cost in advertising per owner-operator hired from about $4,500 to about $850. (John Sommers II for Transport Topics)

“I noticed that there were a lot of silos within the company. In recruiting, we touch every department in some way or fashion, and we had to get those silos broken down and that was one of my first tasks.”

Renfrew noted everyone is interested in getting good and safe drivers. The problem was, he needed to better unify the different departments to really drive recruitment. Those efforts led to a complete revamp of the recruiting process and a company rebranding. He also pointed to the orientation process as another area that was improved.

“The orientation that we had wasn’t very robust,” Renfrew said. “It wasn’t providing what we needed it to out there. So I made a change so that all of the orientation goes through our corporate office. This gives the ability for the president all the way down through every department to come in and talk to the class and welcome them. Make them a part of the family, instead of doing these separate locations and everything. The retention has been helped tremendously with this.”

I made a change so that all of the orientation goes through our corporate office. This gives the ability for the president all the way down through every department to come in and talk to the class and welcome them.

Renfrew also worked with the advertising team to find better ways to recruit drivers. He found the company was paying about $4,500 in advertising per owner-operator hired. He was able to bring that down to $850. He also was able to add efficiencies to the hiring process, which allowed the company to shrink its time from 45 days to 9.3 days.

“It’s all about the team,” Renfrew said. “Cultivating and empowering your team to be able to go out and make decisions to get the job done. That’s what I try to do with everybody there. We have rebranded as I mentioned earlier, our culture has changed. This is all because of the great leadership that we have.”

Freymiller recruiting director Betsy Waldrop and Melton Truck Lines field recruiting manager Lesley Vincent were runners-up. They also shared their thoughts on the driver recruiting environment and what they did to improve their efforts.

“2021 was a tough year for us,” Waldrop said. “We wanted to make sure that we stood out in the end. So, during COVID we took a look at what was going on. Our leadership took the stance that we were not going to apply a mandate. We felt like it was a decision between you and your doctor, not between the employer.

During COVID …0ur leadership took the stance that we were not going to apply a mandate. We felt like it was a decision between you and your doctor, not between the employer.

“We looked around the industry and saw a lot of carriers that were feeling that way. But we didn’t see a leader. So we went out and publicly wanted to make a stand and let everybody know this is what our company stands for. And so, we put that in our advertising campaign.”

Waldrop added it ended up being one of the carrier’s best advertisements campaigns. It drew attention from across the industry toward its recruitment efforts. She also pointed to other changes over the past year such as revamping orientation and bringing on more recruiters.

“We got very strategic with our leads,” Vincent said. “My marketing folks are here today, and they’re outstanding. They challenge us to see all the leads that we would capture, what leads were yielding hires. So, we really streamlined a lot of our leads that way.

“We assigned them to recruiters to make sure that they got them very quickly, same day. Velocity is extremely important in our industry. If we’re not calling the driver first, I know that you guys are. So, we’ve focused a lot on prioritizing these leads.”

My marketing folks …challenge us to see all the leads that we would capture, what leads were yielding hires. So, we really streamlined a lot of our leads that way.

Vincent also noted that her carrier implemented three different pay increases in 2021. All together, they represent about a 20% increase in pay. She also pointed to the critical role leadership plays. Company President Bob Peterson meets with drivers a few times a year to hear their concerns.

“You can’t be up here without having a good team, and I have one of the best teams in recruiting,” Renfrew said. “We had to get everyone in the one-team, one-fight motto, which really changed a lot. Everyone wasn’t pointing fingers, which can happen in the departments you work in sometimes. You got to break those walls down.”

A vehicle on the production line during final inspections at the Nissan Motor Co. manufacturing facility in Smyrna, Tenn. (Luke...

One expert said fleets have options to control costs, and carriers are turning to technology, including cameras, telemetry and artificial...

FedEx to Cut Management Jobs by More Than 10%