She said the U.S. Department of Energy is pursuing plans to establish at least four regional clean hydrogen hubs across the country.

We just announced our intent to provide $8B to develop at least regional clean hydrogen hubs throughout the U.S. that will:
Build grid resiliency
Create good-paying jobs
Support our transition to a clean energy economy https://t.co/CWLUvftDT1

Granholm said DOE will be looking to fund hydrogen hub proposals from states prioritizing environmental justice, equity, clean energy, community engagement, workforce development and climate action. Priorities of U.S. energy landscape and key goals are to ensure benefits to all Americans and focus on jobs, with 40% of benefits in disadvantaged communities.

“There has never been more interest in and more resources behind and more help for this technology and we just cannot let this moment slip by,” she said, urging meeting participants to work together to “ensure that this moment for clean hydrogen changes the course of history, helping us to build our hydrogen-powered clean energy future.”

Her statements June 6 coincided with a same-day DOE release of a notice of intent to fund the infrastructure law’s $8 billion program to develop regional clean hydrogen hubs (H2Hubs) across America. This notice of intent was issued to make interested parties aware that DOE’s Office of Clean Energy Demonstrations will issue a funding opportunity announcement in the near-term.

H2Hubs will create networks of hydrogen producers, consumers and local connective infrastructure to speed up the use of hydrogen as a clean energy carrier, which is critical to DOE’s strategy for achieving President Joe Biden’s goal of a 100% clean electrical grid by 2035 and net-zero carbon emissions by 2050. 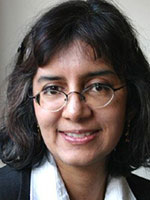 Also at the DOE hydrogen meeting was Sunita Satyapal, director of DOE’s hydrogen and fuel cell technologies office and hydrogen program coordinator, who discussed the federal strategy for hydrogen.

Able to store and deliver energy, hydrogen doesn’t typically exist by itself in nature but must be produced from compounds that contain it. Hydrogen can be produced through low-carbon pathways using fossil fuels (with carbon capture and storage), splitting water using nuclear energy and renewable energy sources (wind, solar, geothermal and hydroelectric power) and from biomass (through biological processes).

DOE noted that 10 million metric tons of hydrogen is produced annually with 55% used in petroleum refining and 35% for making ammonia and methanol.

Satyapal noted that the near-term DOE strategy for hydrogen development focuses on producing hydrogen through electrolysis, advanced fossil and biomass reforming/conversion for delivery from on-site production centers through tube trailers and cryogenic trucks.

Hydrogen would be stored in pressurized tanks (for gaseous) and cryogenic vessels (for liquid). Then it would be converted using turbine combustion and fuel cells for use in space travel, fuel refining and portable power.

Currently, hydrogen from renewable energy costs about $5 per kilogram, according to DOE.

Because cost is a major challenge in hydrogen production, DOE’s Hydrogen and Fuel Cell Technologies Office is focused on developing technologies to make it $2 per kilogram by 2025 and achieve an 80% reduction to lower the cost of clean hydrogen to $1 per kilogram within a decade.

Satyapal said that utilities are showing more interest in renewable energy “than we’ve ever seen before” rather than advanced technology being the primary driver in advancing alternative energy.

She noted that DOE is funding 400 research and development projects with more than 200 companies and universities along with 14 national laboratories.