Gasoline Tops $5 a Gallon in 13 States

Gasoline reached $5 a gallon or more in more than a dozen states a week into the peak summer travel season, as stockpiles of the fuel remain tight.

New Jersey, Maine and Massachusetts joined the $5 club overnight to bring the national average pump price to a fresh record of $4.919 a gallon, according to auto club AAA. At this rate, JPMorgan Chase & Co’s prediction of $6.20 a gallon gasoline by August seems well within reach.

There are now 13 states, plus the District of Columbia, with average gasoline prices above $5 a gallon. The country’s gasoline stockpiles fell to 219 million barrels in the most recent report from the Energy Information Administration, the lowest seasonal level since 2015. In the Central Atlantic, where regional supplies can have an outsized impact on gasoline futures trading in New York, inventories have fallen to their lowest level ever for this time of the year in data going back to 1993. 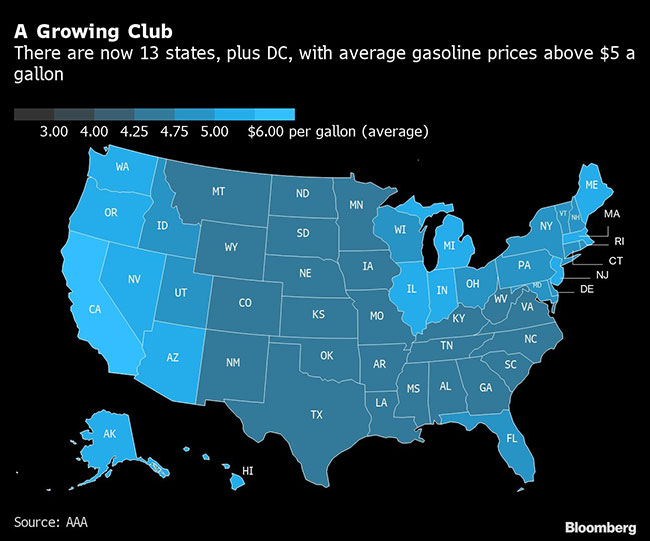 Low stockpiles have so far overshadowed slower gasoline demand growth, which lags the uptick typical for this time of year.

“I do expect consumer resistance to the high gasoline retail price to begin to evidence itself,” said John Kilduff, co-founder of Again Capital.

With assistance from Sophie Caronello.