The U.S. Department of Energy is pushing itself, academia and industry to come up with ways to make and distribute clean hydrogen at a price low enough to boost it into a starring role as the primary alternative fuel of the future.

Many in trucking see hydrogen as the broad fuel of choice once clean production and distribution issues are resolved. Hydrogen fuel cells through electrolysis could generate electricity to charge truck batteries. Hydrogen also could fuel internal combustion engines.

According to the Rocky Mountain Institute, hydrogen has almost three times the energy density of diesel or gasoline. 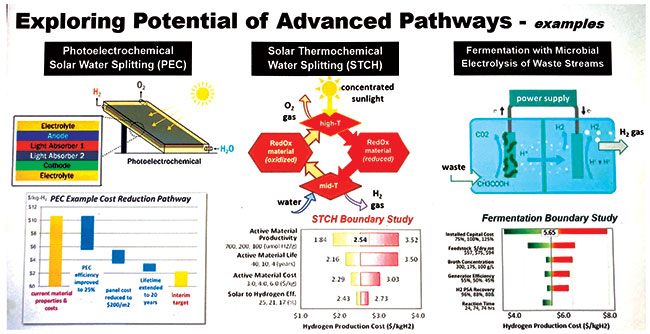 DOE’s Hydrogen Earthshot project’s ultimate goal is to slash by 80% the cost of clean hydrogen, at the point of production, to $1 per kilogram in one decade, or 1-1-1.

“Getting this right is going to mean unlocking a source of clean power and, really, a new method of energy storage. And it is going to mean decarbonizing heavy industry, decarbonizing transportation, giving fossil energy workers skills-matched job opportunities in the clean energy economy of tomorrow,” U.S. Secretary of Energy Jennifer Granholm said during a recent online event that served as DOE’s annual merit review in this field.

Hydrogen can be produced from diverse, domestic resources, DOE noted. Currently, most hydrogen is produced from fossil fuels, specifically natural gas, through steam reforming of methane.

The International Energy Agency said hydrogen production, mainly for the chemicals and refining industries, in 2019 was responsible for 830 million tonnes of carbon dioxide emissions per year.

Biomass, wind and solar power are seen as other eventual means of producing clean hydrogen.

There were 2,300 registrants from 50 countries for the three-day event and 740 people tuned in for her opening plenary remarks, Granholm said.

She said energy ministers and business leaders around the globe have told her they think hydrogen is the “absolute key” to a clean energy transition.

Presenters, after the online event, listed some of the points that need to be resolved. 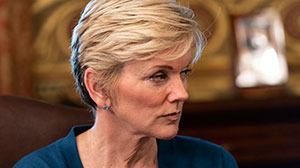 One presenter wrote of electrolysis that several achievements have to line up in order to meet the 1-1-1 target. “Low-cost electricity is so important. One key priority needs to be the design of integrated systems with electrolysis and clean energy sources that can reduce both operating costs and capital costs of the overall system.”

“I am here today to tell you they think we are really on the cusp of hydrogen’s big moment,” Granholm said. “And this administration is really gearing up to make the most of it. We want to map out where we will actually find hydrogen suppliers and users nationwide, and where we are going to see demand growing.”

During her remarks, she announced DOE just issued its notice of intent to provide $8.5 billion for the development of at least four clean hydrogen hubs across the country — at least one producing clean hydrogen from fossil, one from nuclear, and one from renewables.

The notice is DOE’s first major step in getting this funding out the door and into the field, she said.

The production, processing, delivery, storage and end-use of clean hydrogen, including innovative uses in the industrial sector, is crucial to DOE’s strategy for achieving President Joe Biden’s goal of a 100% clean electrical grid by 2035 and net-zero carbon emissions by 2050, the department reported.

DOE, the same day, opened the competition for its hydrogen shot incubator prize, a pool of $2.5 million available to support innovative concepts for producing clean affordable hydrogen to get to that 1-1-1 goal.

It is intended to identify, develop and test disruptive technologies that reduce the cost of clean hydrogen production and meet the DOE Hydrogen Shot goal.

As part of the new infrastructure law, DOE is also developing a clean hydrogen standard.

Different colors, indicating how clean it is, are assigned to the hydrogen depending on the type of production used, experts said. For instance:

Hydrogen is the most abundant element in the universe.

“There has never been more interest in and more resources behind and more hope for this technology. We just cannot let this moment slip by,” Granholm said. “Together we will ensure this big moment for clean hydrogen changes the course of history.”