A red tow truck turned the wrong way on Woodward into oncoming traffic and collided with a white sedan near Seven Mile. The impact sent both vehicles careening out of control.

A red tow truck turned the wrong way on Woodward into oncoming traffic and collided with a white sedan near Seven Mile in Detroit. The impact sent both vehicles careening out of control.

Police found two people from the tow truck and one person from a white sedan – all three taken to the hospital while police try to piece together what happened.

“I heard a bunch of loud crashing and went outside and the woman and the guy and the truck’s upside down, the car is on its side,” said Tony Monzo from the Fast Lane Car Wash. “The woman gets out of the truck and says he’s shooting at us. He’s shooting at us.”

Police are looking into reports this crash stemmed from a road rage shooting – however, at this point, DPD haven’t found any evidence of such an incident.

What they do have evidence of is a head-on crash – and a business in need of a rebuild.

“The gentleman next door put a lot of money into the building over there, it’s a shame,” Monzo said. “He just finished it actually.”

“We’re just out back sitting down and I thought the whole building was coming down actually,” he said.

Fayad says he immediately came around to see a tow truck upside down inside his store. Remarkably, a man and woman got out of the tow truck with no apparent injuries. Witnesses say the driver of the white sedan had an injured leg.

“Cops responded and did a phenomenal job, within a minute,” he said. “No one was able to take off.”

“They arrested both gentlemen and took the lady into an ambulance,” Monzo said.

A closer inspection of the damage shows the crashing truck narrowly missed propane tanks kept near the front door.

“Life is too short. Three people could have been dead,” Fayad said.

Police say they are going over the video of the crash and looking for any additional video or witness accounts to back up the claims that this stems from a shooting or road rage. 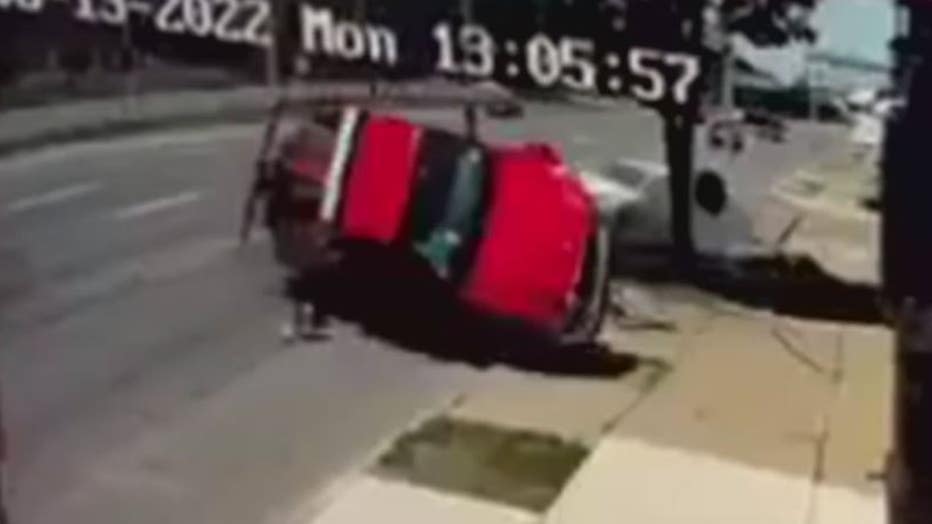