I’ve never seen so much interest, if not desperation, to improve fulfillment,” says James Lawton, vice president and general manager of robotics automation at Zebra Technologies.

And that’s true for companies as diverse as FedEx and iHerb. Both companies, and many others in between, have recently turned to piece picking robotic systems to solve their fulfillment challenges.

But we are to a great extent still in the early stages of robotic piece picking. After all, it was only January 2015 that Modern Materials Handling reported on what was probably one of the first robotic piece-picking pilots “The robots are coming – Part I.”

So, a little guidance on best practices in the selection and use of a piece-picking robotics fulfillment system may be appreciated. Piece picking robots are no cookie-cutter answer, even if they may look like one to the untrained eye. As Simon Kalouche, founder of Nimble puts it, “No one wants to automate and lose throughput in the process.”

That may sound silly, but it has happened. We talked to several experts in piece picking robots and asked their advice on best practices for success with these latest generation automated fulfillment systems. 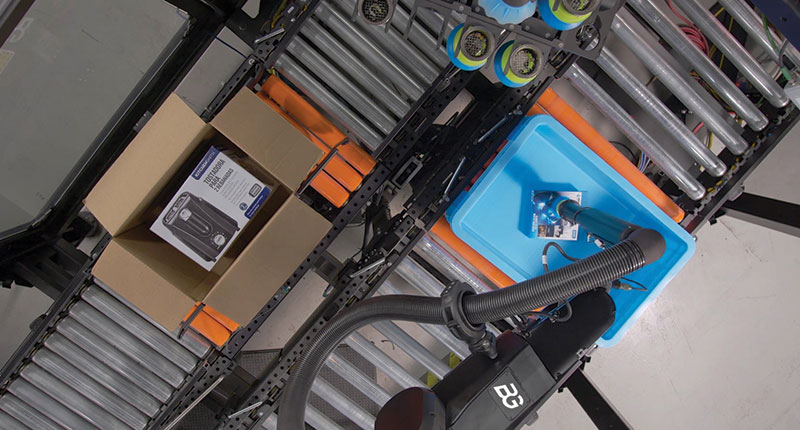 “Transformation for robotic automation is picking up speed across traditional and new industries,” says Milton Guerry, president of the International Federation of Robotics.

Guerry cites e-commerce as a hot bed in particular. “There are thousands of robots installed worldwide today that did not exist in this segment just five years ago. Consumer behavior is driving companies to address demand for personalization of both products and delivery,” Guerry says. And no one we spoke with says anything different.

That list ranges from faster, more accurate picking to reduced labor requirements. Both the labor shortage and a lack of interest in working in traditional warehouse settings plays to the value of piece picking robots. “New training opportunities with robotics are a win-win strategy for companies and employees alike, explains Guerry.

Looking specifically at piece picking robots, people have great expectations for them in the distribution process. “This technology is fully capable of producing a high return on investment of time, money and people,” asserts Matt Kohler, director of applications at Bastian Solutions. 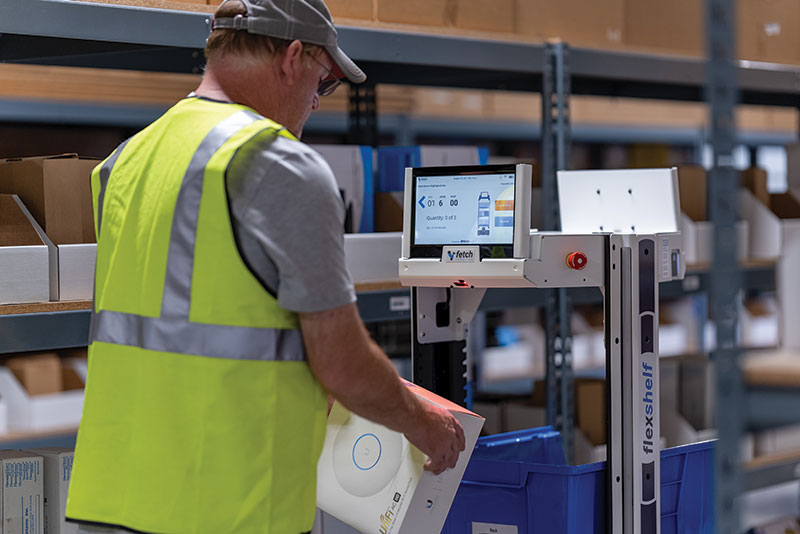 One approach to streamlined picking is to use autonomous mobile robots to carry along a preset pick path of an order’s items picked by humans.

Just as applications and benefits of robots have changed lately, so has the approach of suppliers to distribution centers. Traditionally, robot suppliers have been enamored of their technology. However, that approach is shifting. And rapidly.

“Piece picking robots are all about making the warehouse run better. You don’t want to just buy technology from a bunch of technologists,” says Leif Jentoft, co-founder and chief strategy officer of RightHand Robotics. “It’s not about their love for the technology, but how it helps improve warehouse processes.”

So, there you have it. The first best practice for piece picking robot success: It’s not about the technology. It is about improving the process.

“Look for a solution that has an impact. It can increase throughput. It can reduce human labor. People have to understand their processes first, then work with the supplier on how to improve those processes,” says Kalouche of Nimble.

“Technology vendors have to deliver solutions to problems not a bucketful of tools,” says Lawton of Zebra.

That starts with being able to characterize picking processes—manual, automated, batch, wave, goods-to-person or person-to-goods are some examples.

Furthermore, it’s critical here to understand what exactly is involved in the current picking process, says Kohler at Bastian. For instance, beyond simple parts picking what else do people do? Move totes. Apply labels. Organize orders. Without including all tasks in an appraisal of what the robot will do, the return on investment is sure to lag, says Kohler.

A second best practice: Expect the robots to work to a particular set of KPIs.

Jentoft of RightHand says KPIs are all about better fulfillment. There’s the range of inventory that the robots can handle, an expected rate of picking, targeted order integrity and an expected autonomy for the robots. “Ultimately, it’s about the reliability and accountability of the robots. They must enhance the flow and the process,” says Jentoft.

Kishore Boyalakuntla, vice president of products at Berkshire Grey, cites FedEx as a company that built its robotic solution to KPIs. The carrier uses robots to handle small packages at several regional hubs. Ted Dengel, managing director of operations technology and innovation at FedEx, says each robotic system sorts 1,000 to 1,100 packages an hour.

According to Boyalakuntla, FedEx set out to “automatically handle high volumes of small packages in small spaces with limited worker intervention, which significantly reduces labor challenges, streamlines sorting processes, and increases the efficiency of carrier operations.”

Now for a third best practice. Hold on. It’s a bit complex. “Look for a system that is flexible, scalable, modular, robust and requires little to no teaching,” says Boyalakuntla. Oh, is that all? But, yes, it is possible, going back to Kohler’s earlier comment about being fully capable. Let’s break it down.

Flexibility is important because everything keeps changing from SKUs to order profiles. What a robot picks today may not be the same for long.

Scalability is important because throughput is changing. Remember what e-commerce looked like before Covid. Quite different, actually.

Modular is important because it allows the easiest path to adapting to dynamic conditions.

Robust is important because it accommodates the first four requirements on the list.

Requires little to no teaching is important because this is the future, which, to a great extent, is already here. Suppliers generally agree that artificial intelligence (AI) advances that allow robots to learn on the fly are the single greatest technical advancement in the past couple of years.

We’ll round this out with a fourth best practice: The best solution is an integrated one, not a point solution. No one can afford to have an island of automation in a dynamic, fast-paced facility.

This can be accomplished in a couple of different ways. One is to integrate it directly to the warehouse management system (WMS) and other facility-wide software systems.

“A second approach is to have robots function autonomously, similar to the ways that humans work. This pushes real-time data collection and decision making to the edge of what is currently possible using AI.” That’s the path Jonathan Styles, director of continuous improvement at iHerb, chose for the Nimble robots that interface with a bank of automated sorting equipment.

It’s worth noting that there are, at this point, two distinct approaches to piece picking robots.

One is what you would expect. A robot with a single arm, vision system, artificial intelligence and related software. There’s also the end effector that is either a suction cup or gripper with fingers of some configuration. The majority of these are stationary, but they can be made mobile by mounting them on a vehicle of some sort. Many operate outside of a cage. 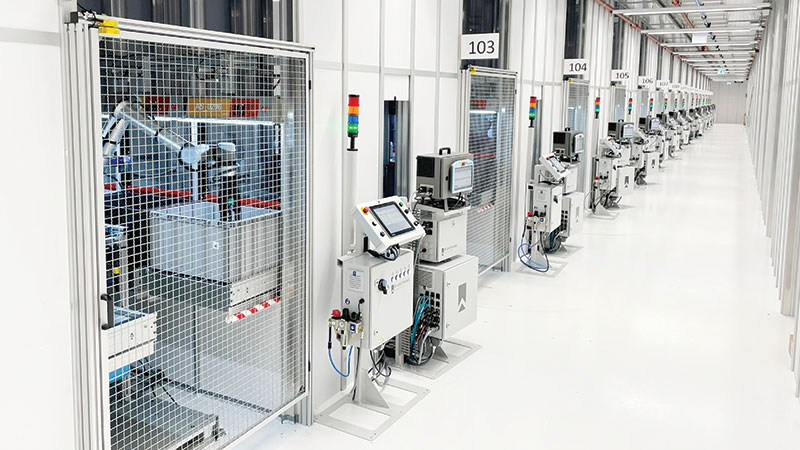 The other approach is the one taken by Zebra. It recently bought Fetch Robotics, a supplier of autonomous mobile robots (AMRs). As Lawton explains, at this point the AMRs are not outfitted with robotic arms. Instead, people manually pick items and place them on the AMR that carries them through a pick path, collecting other items and on to a final destination.

As Lawton explains, the idea is to reduce—if not eliminate—steps and travel time of the people out on the floor. He calls it a zone-based, robot-assisted solution that optimizes the behavior of robots and people. And he doesn’t rule out the possibility of a robotic arm on each AMR a few years from now.

There’s no question that robots are all about removing as much human labor from piece picking as possible. And while the Zebra solution does that in one way, those that use robotic arms require people in another.

Quite simply, piece picking robots with arms are not entirely autonomous. A bank of them requires people to intervene occasionally when they can’t solve a problem. These range from deciding what to do when an empty bin arrives, but the robot is supposed to pick two items to the wrong items are in a bin.

Exactly how autonomous a robot should be is up for discussion. While some cite lower numbers, Kohler of Bastian puts it at 98% to 99%. Percentages aside, probably the best gauge is how many people are needed to manage so many robots. If two robots have a problem every minute or two that requires different staffing than for a bank of 20 robots that each have a problem every 30 minutes or so. Ultimately, it’s all about the process.

If you’re looking for some best final advice for piece picking robot success, Jentoft at RightHand says this: “Don’t let technology eclipse the importance of making the warehouse run better.”

After years of “unmitigated growth,” the nation’s busiest port complex is facing calls to lower its carbon footprint from Southern...