“That has historically been one of the shortcomings that we have not been able to capture the full potential due to the supply chain’s lack of resilience,” he said, “not only related to the situation we have now, but generally speaking, and that is work that is ongoing.” 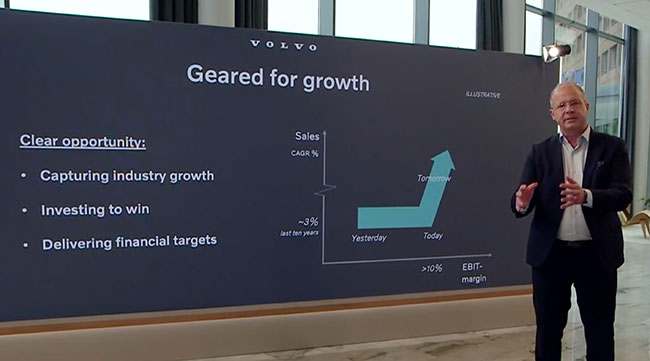 The company noted different dates are being suggested on when autonomous freight shipments will begin. Volvo believes that will start around the middle of this decade with a gradual shift that will take several years before the truck maker can cover all regions in the United States.

“Very soon we will open up our reservation program in the U.S. for autonomous freight capacity. So more news coming soon,” said Nils Jaeger, president of Volvo Autonomous Solutions.

Volvo expects to realize five times the revenue compared with a standard truck on autonomous solutions through transport as a service features.

• Confined areas: Such as mining and quarries. It has an in-house virtual driver it developed that is now available.

• First mile: Such as for ports and logistics. It partnered with Nvidia — with its artificial intelligence platform for training, simulation and in-vehicle computing — in 2019 to jointly develop a solution.

• Middle mile: or hub to hub. Starting in the U.S. It partnered with Aurora, which also supplies self-driving software and technology to Paccar Inc., whose North American brands include Kenworth Truck Co. and Peterbilt Motors Co.

Electric trucks and diesel engines will play large roles, too.

“We have a good product on the diesel side and the electric side in North America,” Volvo Trucks President Roger Alm said. “We are taking profitable market share with good price realization and good price increases that are getting out. And also, we have a leading position into the electric mobility.”

“We have electric trucks in customer operations in 21 countries around the world. And customers are coming back.” – Roger Alm, President @VolvoTrucks.
Watch #VolvoGroupCMD live here. https://t.co/PweBDEnqhB pic.twitter.com/SIy4coTbhq

Overall, Volvo forecasts 50% of group revenue from services by 2030 compared with 21.5% in 2021, leading to higher margin and less volatile earnings through the cycle.

Agarwal also noted Volvo recently announced its entry into battery pack assembly, and it intends to integrate module assembly “as management believes they can add value to the highly automated process.” 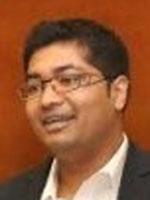 The backdrop for Volvo’s efforts is a process it calls CAST ( common architecture and shared technology).

CAST is meant to develop modular products and services that can be easily integrated to meet legal, market and societal needs, and that exceed customer expectations, according to Volvo.