Economic conditions in the country and in trucking remain relatively strong, but American Trucking Associations Chief Economist Bob Costello said he has concerns about early 2023 and puts the chance of a recession in the first quarter of the year at 50-50.

Speaking on Transport Topics’ Newsmakers program, which will be available online July 12, Costello said rising fuel prices, inflation and softening demand in the trucking industry are some of the reasons why a recession is possible.

“We are slowing down, absolutely 100%,” Costello said. “Are we going into a recession or not a recession, that’s a hard call to make. It’s easy to go both ways on that point. For 2022, we are going to see a lot slower growth than 2021 but not an actual contraction. But the probability of a recession over the next 12 months is rising and it’s about 50% right now, and we’ll have to keep monitoring things.” 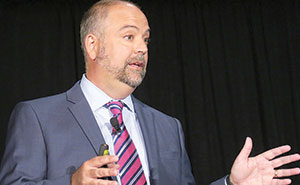 “A lot depends on what the Fed does and what happens with inflation,” ATA Chief Economist Bob Costello says. (TT File Photo)

Costello said action by the Federal Reserve to increase interest rates even further will determine if the economy is able to navigate a so-called soft landing and continue growing and see inflation ease. But he is not convinced that will happen.

“A lot depends on what the Fed does and what happens with inflation, generally what is the impact of that on consumers,” Costello added. “But it’s slower growth at best, and after that, and a recession at worst. It’s hard to determine right now if the economy is going to dip into a recession or we are just experiencing really slow growth.”

However, Costello believes the overall American economy has shown significant resilience during the pandemic and its lingering aftereffects, and a recession, if it occurs, won’t be particularly long or deep.

“If there’s a recession, it will be pretty mild — not like the Great Recession of 2008, it won’t be anything like that,” Costello said.

“The first quarter was down and I think in the second quarter the economy barely grew, less than 1%, maybe a half a percent,” he added. “We may have actually had a recession, maybe not, we’ll have to wait and see. But the labor market has been very tight.”

The federal government’s Bureau of Labor Statistics on June 30 revised downward to 1.6% from 1.4% the economy’s contraction in the first quarter. Federal researchers said the economy shrank in 46 of the 50 states primarily because of the spread of the COVID-19 omicron variant, which resulted in continued disruptions nationwide and federal COVID aid to businesses and individuals decreased as several programs expired or tapered off.

The Transport Topics Top 100 For-Hire Carriers list ranks the largest players in the trucking industry. In this episode, the makers of this year’s list discuss how it came together and what it means for the supply chain. Tune in above or by going to RoadSigns.TTNews.com.

Costello said the trucking industry continues to do well as tonnage in May was up 3.7% year-over-year. However, ATA’s monthly tonnage report is dominated by contract freight and while that sector of the economy remains strong, spot market rates have dropped by as much as 25% when measured against 2021’s record-setting numbers. Also, fuel prices have skyrocketed as diesel is more than $2 a gallon more expensive than at this time last year.

“What happened during that boom in 2021 as households we were not traveling as much, not spending on services, we were fixing up our homes and buying stuff for our homes and we were putting it on trailers,” Costello said. “After inflation, consumption of goods by houses went up 12%, incredible numbers.

Costello said the explosion of freight into the spot market resulted in hundreds of new carriers obtaining operating authority from the Federal Motor Carrier Safety Administration. He says it’s possible some of those new companies may be undercapitalized and carrying excessive debt to buy equipment, leaving them vulnerable with the downturn in spot rates.

“That increase in the spot market led to a bunch of smaller carriers, one- and two-truck operators getting their operating authority and they got a DOT number, but that’s not what happened. But we are now transitioning back to the prepandemic, traditional market split between contract and freight,” Costello said. “The economy is not falling off a cliff, but there won’t be as much freight to haul and they’re already seeing that.”

Costello said he is encouraged to see fuel prices beginning to drop as many four-wheel drivers and some professional truck drivers say they are cutting back their gasoline and diesel usage, which is softening demand.

“There are some people not driving quite as much,” he said. “But people have this pent-up demand for travel and people are flying and driving, even through fuel prices are high. But there is some demand destruction, and it’s one of the reasons why freight is slowing down as we transition back and as families pay more for fuel they don’t have as much money. Gasoline is eating that up.”

U.S. trailer orders in August jumped compared with a year earlier, but were still tepid at 17,700, the third-lowest this...

It's that time of year again in Louisiana: the sugar cane harvest. And officials are warning drivers about cane trucks...

Oil headed for the longest stretch of weekly losses this year as central banks around the world stepped up the...