Expensive gasoline is keeping more U.S. drivers off the road than the COVID-19 pandemic did at this time two years ago.

The country’s demand for gasoline tumbled last week to 8.06 million barrels a day, below the same week in 2020 and the lowest seasonally since 1996, according to the U.S. Energy Information Administration. Aside from the same period two years ago, the four-week rolling average of gasoline demand was the lowest on a seasonal basis since 2000.

The drop in demand followed a modest rise in the prior week when fuel retailers stocked up ahead of the July 4th weekend. But the holiday bump proved as marginal as it was fleeting: The numbers now paint a clearer picture of demand faltering amid mounting concerns over a wider economic slowdown. 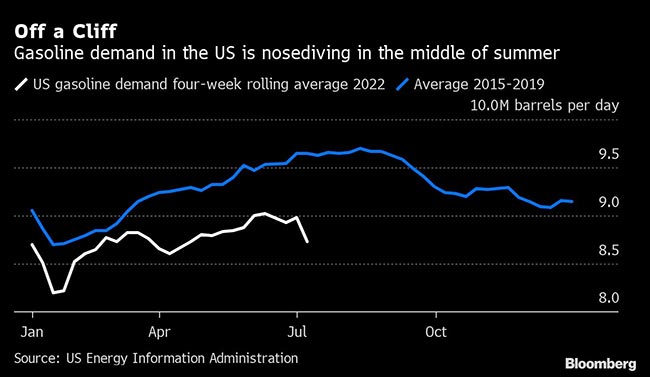 The cracks in consumption started to appear in March but were exacerbated about a month ago, when pump prices mounted a record rally to peak at $5.016 on June 13. Prices have fallen steadily for nearly a month now, but not enough, it seems, to entice more drivers back onto the road. At $4.631 a gallon, gasoline is still 47% more expensive than a year ago, according to auto club AAA.

Fuelmakers are showing no signs of slowing. Gulf Coast refiners operated at the highest rate last week since 2018. The drop in demand meant a lot of that production went straight into storage. The country’s gasoline stockpiles increased to 22.5 million barrels, EIA data show, marking the biggest weekly gain this year since January.

Distillates demand is sticking close to the pre-COVID average for this time of year. Diesel use is the best energy-market indicator for the broader economy, as the majority of goods in the U.S. are transported by trucks that burn the fuel.

Looking ahead, last week’s sharp drop in gasoline demand may not last. Most Americans rely on cars to get to and from work, and with the unemployment rate holding near a five-decade low, there’s plenty of scope for a turnaround. For now, the summer is a period when a portion of gasoline demand is expendable as people can choose to cut back on leisure driving.

Tesla was forced to recall more than 1 million electric cars in the United States over windows that could pinch...

A Russian army Kamaz truck, destroyed in northeast Ukraine.Via social media Russian authorities have begun rounding up the first of...

U.S. business activity contracted in September for a third straight month, though at a more moderate pace as a pickup...

A yet-to-be identified 60-year-old woman has been crushed to death at First Gate Bus Stop along the Lagos-Badagry Expressway. The...

OMAHA, Neb. — A last-minute deal prevented a railroad strike for now, but many rail workers remain unhappy with working...