WASHINGTON — In a surprise victory for Republicans, the Senate on Aug. 4 voted to overturn a Biden administration rule requiring rigorous environmental review of major infrastructure projects such as highways, pipelines and oil wells — a victory enabled in part by Democratic Sen. Joe Manchin of West Virginia.

Manchin, a key player on energy and climate issues and a swing vote in the closely divided Senate, joined with Republicans to support the measure, which was approved 50-47. The vote comes as Manchin has proposed a separate list of legislative measures to speed up environmental permitting for major projects in return for his support of a Democratic bill to address climate change.

Republicans voted unanimously to overturn the Biden permitting rule, while Manchin was the only Democrat to support it. Three senators were absent: Republican John Cornyn of Texas and Democrats Patrick Leahy of Vermont and Jeff Merkley of Oregon. The vote sends the measure to the Democratic-controlled House, where it is unlikely to move forward.

Still, the vote signaled strong Senate support for action to reform the often onerous federal permitting process, which can take up to eight to 10 years for highways and other major projects. Streamlining federal review is a top Manchin and GOP priority that is not shared by most Democrats. 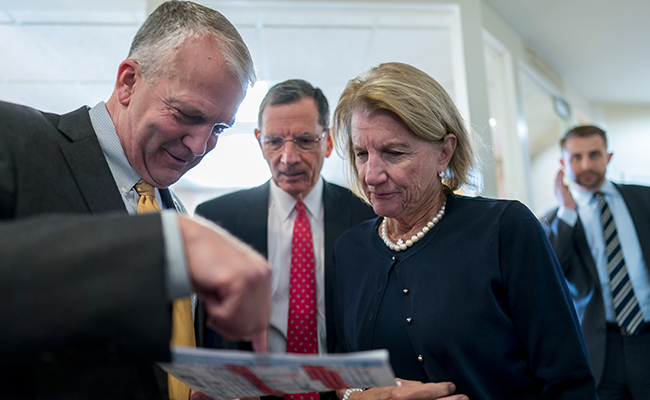 Sen. Dan Sullivan, an Alaska Republican, sponsored the measure to overturn the Biden rule, saying new regulations under the National Environmental Policy Act, or NEPA, will further bog down the permitting process and delay critical infrastructure projects the country needs.

The Biden rule — which overturns an action by the Trump administration loosening environmental reviews — requires regulators to consider the likely impacts on climate change and nearby communities before approving major projects. The new requirement “is going to add to the red tape” that prevents major infrastructure projects from being approved in a timely manner, Sullivan said.

“The only people, in my view, who really like this new system are radical far-left environmental groups that don’t want to build anything … and probably the Chinese Communist Party,’’ he said on the Senate floor. China and other competitors likely “love the fact that it takes 9 to 10 years to permit a bridge in the U.S.A.,’’ Sullivan said.

The new rule, finalized this spring, restores key provisions of NEPA, a bedrock environmental law that is designed to ensure community safeguards during reviews for a wide range of federal projects, including roads, bridges and energy development such as pipelines and oil wells. The longstanding reviews were scaled back under former President Donald Trump in a bid to fast-track projects and create jobs.

Tesla was forced to recall more than 1 million electric cars in the United States over windows that could pinch...

A Russian army Kamaz truck, destroyed in northeast Ukraine.Via social media Russian authorities have begun rounding up the first of...

U.S. business activity contracted in September for a third straight month, though at a more moderate pace as a pickup...

A yet-to-be identified 60-year-old woman has been crushed to death at First Gate Bus Stop along the Lagos-Badagry Expressway. The...

OMAHA, Neb. — A last-minute deal prevented a railroad strike for now, but many rail workers remain unhappy with working...