Heading into its 85th anniversary after a two-year hiatus, the National Truck Driving Championships return with a high level of excitement and a slate of competitors ready to once again showcase their skills behind the wheel.

Billed as the “Super Bowl of Safety,” the event brings truckers who have proven their mettle in state-level competitions to a national stage. Tournament qualifiers, who will compete in Indianapolis in various vehicle classes Aug. 16-19, said they are eager to display their skills and talents in front of industry enthusiasts, fans, families and friends.

Most of the competitors and volunteers who make up the NTDC family, as they refer to themselves, have not seen each other since COVID-19 suspended the event in 2020 and 2021. Such a pause had not happened since World War II. Going into this year, competitors and organizers point to a new level of enthusiasm.

“It’s great to be part of the family,” he told Transport Topics. “It’s always great to see good family people, professional people that care about what they do. They care about the industry and they care about being safe.”

Woodrome, who also claimed the 2018 Grand Champion crown, will compete in the sleeper berth division. He acknowledged that colleagues bring with them an array of talents and charisma to elevate the nationals’ spirit of competition.

“It’s competitive in any class,” Woodrome said. “These are the best drivers in the nation. We throw that out there, but they really are. And they’re also some of the best people, too, professionally in the nation.” 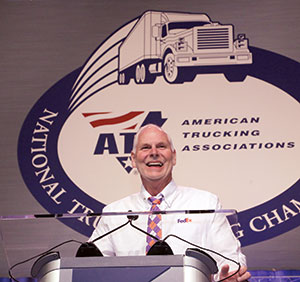 Woodrome speaks to the crowd after his 2019 win was announced. (John Sommers II for Transport Topics)

Plus, NTDC is not only a venue for elite drivers and organizers. The event also welcomes the families of the drivers, dozens of volunteers and industry and government executives. “You get to reunite with all these people,” Woodrome said.

To win their respective classes, drivers must accrue top scores in three disciplines: an evaluation of industry guidelines from the 2022 Facts for Drivers rulebook, a pre-trip vehicle inspection and maneuvering their specific truck on a safety course. Strong performances across the three disciplines, along with maintaining a focus while competing, are said to be keys that help determine a driver’s outcome. Drivers compete in the 3-axle, 4-axle, 5-axle, sleeper berth, twin trailers, tanker truck, flatbed truck, straight truck and step van classes.

The tournament’s overall top scorer takes home the blue-ribbon title of national grand champion. This year, Woodrome will not be the only former top winner competing. From Alabama, Alphonso Lewis with Yellow will be driving in the 5-axle. Lewis was national champ in 2007. Wisconsin’s Jeff Langenhahn with XPO Logistics, grand champion in 2014, will compete in the twin trailers class. Indiana’s Mike White with Walmart, driving the sleeper berth this year, earned the status in 2016. And Connecticut’s Roland Bolduc of FedEx Express, also competing in the sleeper berth, won the tournament in 2017. 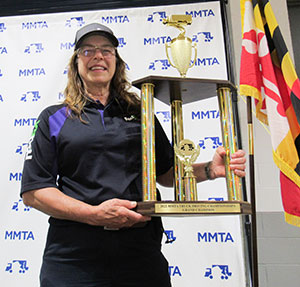 Joyce Bain with FedEx Ground, grand champion at this year’s Maryland qualifier, will find herself competing alongside Woodrome, White and Bolduc in the sleeper berth class. Like the current grand champion, she pointed to the excitement associated with the tournament’s return after its two-year hiatus. “I think everybody has been waiting for this,” she told TT while training for nationals this summer. “Thank goodness we’re getting back on track [because] it’s something we look forward to doing.”

Bain suggested the break may have left some drivers “a little rusty” when it comes to competition. “That should be a little interesting — to see how that all plays out.”

Echoing a similar sentiment is Tim Melody with ABF Freight, this year’s Oregon grand champion competing in the 3-axle class. “Really glad that COVID is over with and we’re back competing,” he said. “And really looking forward to being there.”

Melody, who served as an America’s Road Team Captain in 2017, won the twin trailers division at NTDC in 2013. He also has recorded a perfect score at the nationals’ exam portion.

Nearly two dozen drivers will be making their NTDC debut at this year’s event. The organizers refer to these newbies as “rookies.”

“I think the rookies are great,” she said. “Colorado was lucky enough to have a rookie of the year one year. That moment, and that excitement, carries through everything.”

She added, “I think the excitement that the rookies will have, whether they’re a rookie to nationals or first time ever competing, that brings a whole new energy to the room. There’s a lot to absorb. But once you’ve been exposed to the National Truck Driving Championships, you get that bug. And you do everything you can to get back year after year after year.”

For Rodney Myers, the national forum is a great venue for professional drivers to connect with each other, celebrate a culture of safety and remind the nation of their contributions. The competition, he affirmed, promotes trucking and solidifies drivers’ status as essential personnel in the economy.

The tournament also offers an infectious high-level of professionalism for those involved.

“Having not been able to do this for three years, and we joke that it seems like just yesterday, but to truly realize that there’s a lot of time and effort that goes into this on behalf of our competitors, on behalf of our volunteer group, on behalf of all the companies,” Myers said, pointing to NTDC’s sense of belonging to an industry passionate about highway safety. “It’s just so good to be able to get back together and celebrate this very important event.”

The tension builds as the competition progresses. Drivers build up points totals during the first two days, and on the third day the top five scorers from each class face-off in a final round.

For Rick Cates, the opportunity to witness drivers’ performances is always thrilling. A member of the event’s organizing committee and consultant with JMJ Associates, Cates is a fixture at NTDC. The lifelong trucker said he simply admires the skill on display from these best-of-the-best drivers.

“Seeing some of the ones who are champions come through [to become] grand champions over the years —it’s just like they’re superstars,” Cates said. “Being able to get close to them, and talk to them, and see some of their input on what it takes to be a professional driver; what it takes to drive safely and manage driving a truck and family time. Balancing all that and still managing to practice to become a champion in their class or a grand champion.” 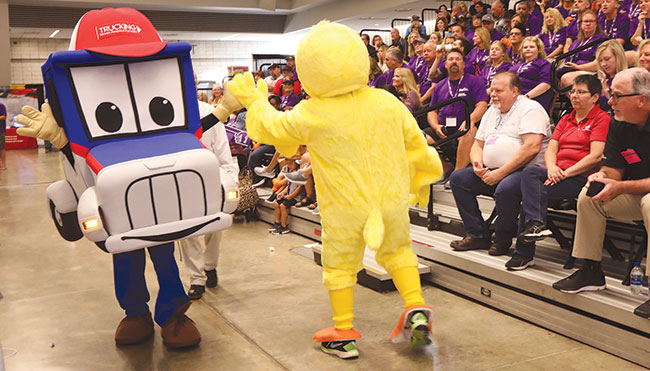 Safety Sammy and the NTDC duck mascot at the 2019 championships in Pittsburgh. (John Sommers II for Transport Topics)

The tournament is set to take place at the Indiana Convention Center. In addition to recognizing the top drivers from each class, NTDC also honors the state team that records the most points and a rookie of the year. There is a vehicle condition prize, the Neil Darmstadter professional excellence award, and the Sam Gillette lifetime volunteer award.