Medium-duty electric commercial vehicles from box trucks to specialty applications are anticipated to play a large role as regulators and businesses turn to axing greenhouse gas and carbon emissions in the years ahead.

As of late last year, 28 states had released climate action plans, four were updating their plans and two were developing a plan to reduce greenhouse gases/carbon emissions by 25% to 50% as early as 2030.

Alaska rescinded its climate action plan, according to data from the Center for Climate and Energy Solutions, the successor to the Pew Center on Global Climate Change, which was founded in 1998. 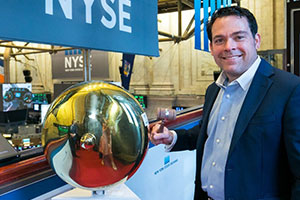 Some medium-duty electric trucks eventually will move down production lines like commodities.

Others will be assembled for specialized uses on more flexible production lines as startups strive for scale with multiple vehicles.

Electrifying specialty vehicles “is a huge white space for our business. Electrification is in a transition,” Tim Reeser, founder and CEO of Loveland, Colo.-based Lightning eMotors, told Transport Topics.

“It hasn’t been written enough about in my opinion that there is this change driven by electrification having different requirements on the weight of the vehicle,” he said.

Buyers contemplating a move to electrification from internal combustion engine-powered commercial vehicles will have to move up to the next highest weight class above what they are used to because the weight of the batteries in ECVs reduces the allowable payload.

Host Mike Freeze gets Jason Gies, Navistar’s VP of eMobility, to spill the tea on everything from how fleets are charging now to how far policymakers are willing to go to up the public electric truck charging game. Tune in above or by going to RoadSigns.TTNews.com.

“And that comes with all sorts of complexities in the commercial vehicle space,” Reeser said.

Lightning converts for customers new and used ICE vehicles to zero-emission powertrains — including passenger and delivery vans, shuttle buses, cargo trucks and step vans. It also does this for original equipment manufacturers looking to provide electric powertrain options for their customers.

“Classes 4-5 is our bread and butter. There is very little other EV competition in this space, and even in the ICE world there is a lot of turnover and rethinking about who wants to be in the space,” Reeser said.

Other than their partnerships with Lightning, Ford and General Motors do not have an electric solution for their Classes-4-5 space, he said.

He suggested Ford would rather stay with building as many ICE or electric F-150 pickups as it could in a year.

“This idea of taking 5,000 e450s and spending a couple of billion dollars on an electrification solution that then has to be customized with every single offering, that’s not what the major OEMS have ever wanted to do, nor is it what they want to do going forward. They are good at high-volume manufacturing.”

Other truck makers, he said, will take box trucks — typically in Class 6 — and use a one-size-fits-all for those electric nonspecialized vehicles, and they will make good products.

Meanwhile, Lightning eMotors is the only company that makes an electric ambulance, he said, “and we have only had that less than a year.”

Each modular unit offers between 105 to 420 kilowatt-hours battery capacity and provides the option of up to five DC fast-charging outputs. The new systems are available to order for delivery late this year.

“Lightning’s next-generation mobile charger can support an accelerated rate of fleet electric commercial vehicle adoption while their depot charging is being installed,” he said, “a process that, unfortunately, can take a long time.”