At the start of the year, Mark Brundage was tied up with plenty of work obligations and family commitments, which left little room for truck safety tournaments.

But a last-minute opening in his schedule in May made it possible for Brundage to take a shot at Virginia’s trucking competition. His schedule afforded him about two weeks to prepare.

After studying the newest edition of the Facts for Drivers book and relying on his daily work routine, Brundage surpassed his own expectations and took home best-in-show. That blue-ribbon performance marked his third time being crowned grand champion in the Old Dominion. The victory in the 3-axle also clinched his sixth trip to the National Truck Driving Championships.

“To be honest with you I almost did not compete this year because of my busy schedule with my son’s baseball and everything else. We weren’t sure if tournaments and stuff were going to interfere. So, once we looked at the schedule, it actually happened to work out. So I was like, ‘OK, well, you know, I’m going to go ahead and start doing it,’ ” Brundage, a FedEx Express driver, told Transport Topics recently. “So it was kind of a last-second thing.”

With nationals kicking off this week (Aug. 16-19), Brundage admitted he is ready to display his skills in the tournament’s disciplines. The Facts for Drivers audio version is pretty much stuck in his head. That will be useful when he is tested on it during NTDC’s written exam. And he plans to tackle the tournament’s pre-trip vehicle inspection and safety driving course similar to a typical workday.

“I drive every day, so when I go to locations and stuff and when I’m backing into loading docks and stuff I just kind of treat it like I’m on a course,” he explained.

Brundage also emphasized he is focused on his performance and not on the rest of the field. This year’s 3-axle class includes several top performers, such as reigning national 3-axle champion Brian Walker, a TForce Freight driver from North Carolina. 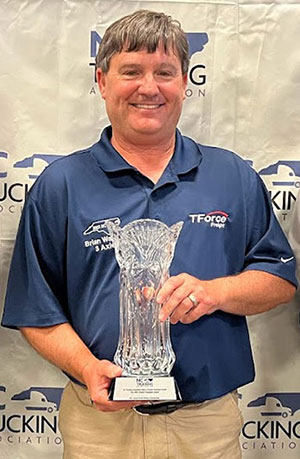 “I know I have my hands full. I don’t really think of it that way. The way I typically look at everything is that I can’t control anything that anybody else does. I can only control what I do,” he explained. “And so for me it’s just about: It’s essentially me against the course; me against the test; me against the pre-trip, all that.”

“So as long as I can get as many points as I can possibly do,” he continued, “I know I’ve given it my all and then I just hope that it’s enough.”

The more than 400 drivers taking part in NTDC in Indianapolis this week will be returning to center stage after a two-year hiatus. The national tournament was put on hold during the pandemic. Cheering for Brundage at the event will be his wife, Robin, his mother, Susan, and her boyfriend, V.J.

Notably, the opportunity to reconnect with colleagues and friends who support the industry will be a special feeling. As Brundage put it, “Basically, really excited about seeing everybody — all the old faces as well as new ones.”

The trucking technology company Trucker Path determined the best and worst interstate highways for truck drivers based on the availability...