Daimler Truck announced a leadership change for Torc Robotics, the autonomous technology developer it acquired in 2019.

The manufacturer on Aug. 18 said that Torc founder and CEO Michael Fleming will voluntarily step down from leadership of the Daimler independent subsidiary. He will be succeeded Oct. 1 by longtime Daimler executive Peter Vaughan Schmidt, who leads the truck maker’s autonomous technology group.

The change comes as Daimler moves toward perfecting a global platform and eventual series production of autonomous commercial vehicles.

Torc announced today that Dr. Peter Vaughan Schmidt has been appointed the incoming CEO following a long-held transition plan. Schmidt will succeed Michael Fleming, who will retain a seat on the Board of Directors as key advisor, on Oct. 1, 2022. https://t.co/Wsk0C5M5zl

Fleming, who will remain on the company’s board, founded Torc in 2005 after competing for Virginia Tech in the U.S. government’s 2004 and 2005 DARPA Grand Challenges — intended to test the effectiveness of early self-driving vehicles as they ventured over a 132-mile course in the Mojave Desert.

“I would like to extend my heartfelt thanks to Michael Fleming,” Daimler Truck CEO Martin Daum said in a release. “His achievements for our company and for our industry as a whole cannot be overstated. He is a true pioneer and visionary who paved the way for autonomous driving, founding Torc Robotics 17 years ago.” 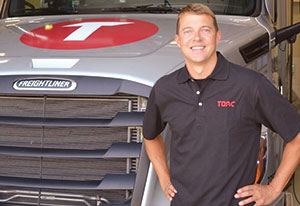 Torc founder and CEO Michael Fleming will remain on the company’s board. (Torc Robotics)

At the time of the acquisition, Fleming said, “Great things are not accomplished in short order, and we have always believed this race to be a marathon and not a sprint. The lessons learned and foundation we’ve created over the last decade has positioned us as one of the most experienced firms in the self-driving space.”

Daum noted the aim now is to establish Torc as a global company with four locations, bring autonomous trucking technology to perfection in the next few years, and ultimately to series production.

“Peter has been responsible for autonomous driving at Daimler Truck for many years and has been closely supporting Torc since we invested in 2019. I am very pleased that we have the right personality in him to shape this next phase as CEO of Torc,” he said.

Schmidt joined Daimler in 2005. His experience includes production and plant management, as well as product and platform management. He has led large organizations and acquired ample expertise in commercializing products, according to the company.

Torc will continue to be an independent subsidiary of Daimler Truck.

Daimler called the move part of a dual-strategy approach as it had recently acquired Torc Robotics.

Waymo is an autonomous driving technology company that got its start as the Google Self-Driving Car Project in 2009.

State and local officials need to act proactively to make sure that widespread use of self-driving vehicles doesn’t leave out...

Driverless Vehicle Technology Demonstrates Its Agility in the Construction Industry

Welcome to Thomas Insights — every day, we publish the latest news and analysis to keep our readers up to...

Torc Robotics, a subsidiary of Daimler Truck, is working on Level 4 autonomous systems that will permit trucks to operate...