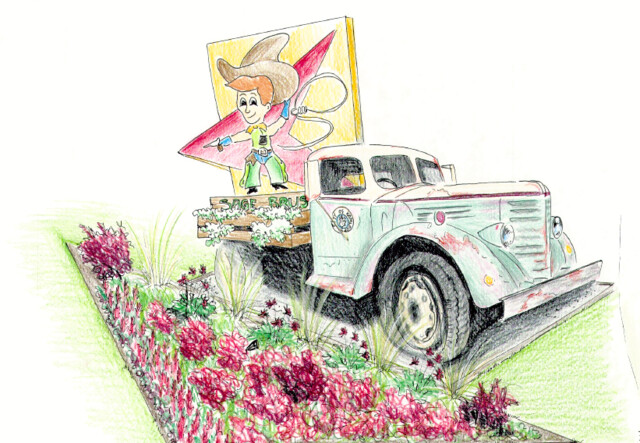 An artist’s rendering of a display in the city’s soon-to-be-complete Truck Chilling Park, featuring a 1949 Federal truck and the neon Sagebrush Sam sign from the former Sagebrush Motel on Columbia Street.

A new park being constructed near the City of Kamloops’ Civic Operations Yard will showcase vintage trucks and equipment, as well as a historic refurbished neon hotel sign.

A news release from the city said Truck Chilling Park will be located at the corner of Bunker Road and McGill Road. The city said the park project cost $92,000, and is estimated to be complete in September.

Jeff Putnam, the city’s parks and civic facilities manager, said in a statement the park property has been home to a retired 1940’s one-ton GMC truck, which serves as a centrepiece for flower displays.

“It was so popular with the public, we decided to add more pieces and formalize the space into an accessible park,” Putnam said.

According to the city, the park will include a 1947 Chevrolet pickup truck, a road grader purchased by the city in 1928, and a 1949 Federal truck.

The back of the Federal truck will be loaded up with a piece of city history — the original hat-tipping Sagebrush Sam neon sign, which was on display for several years at the Sagebrush Motel on Columbia Street.

Julia Cyr, the city’s museum supervisor, said the sign will be a familiar sight to many Kamloops residents.

“We’re looking forward to having such a fun piece of Kamloops history preserved and on display in a beautiful setting for residents and visitors to enjoy,” Cyr said.

The city said it acquired the vintage sign after the Sagebrush Motel was demolished in 2008, and refurbished it to be permanently displayed at the park.

The vehicles and pieces of equipment showcased in the park will be surrounded by floral displays that will change seasonally.

The city said the park will have accessible parking and pathways, several trees, picnic tables and historical signage.