Sandvik Mining and Rock Solutions today introduces its AutoMine® Concept Underground Drill, the company’s second technology demonstrator for its future autonomous mining vision. The AutoMine Concept Underground Drill is a fully autonomous, twin-boom development drill rig capable of drilling without human interaction. The cabinless battery-electric drill can plan and execute the entire drilling cycle from tramming to the face, setting up for drilling, drilling the pattern and returning home to charge for the next cycle.

“We’re continuing to push the boundaries of mining automation and demonstrate what will be the reality in the near future,” said David Hallett, Vice President, Automation at Sandvik Mining and Rock Solutions. “We chose a development drill as our next Concept Vehicle to demonstrate that autonomy can also work effectively in a mine’s development phase, in constantly changing environments.”

Hallett additonally told IM on the day during the Innovation in Mining customer event in Tampere, Finland where the drill was unveiled and demonstrated: “This machine will continue to serve as a technology development tool and demonstrator for commercialisation of products that we will introduce into our AutoMine product offering.” He also pointed out that AutoMine has been around since 2004, deployed to 80+ sites globally, and on 600+ machines (trucks, loaders, surface drills, and underground production drills). “This concept machine is to give a picture of the future technologies that we will incorporate into our already existing and well established AutoMine platform.” 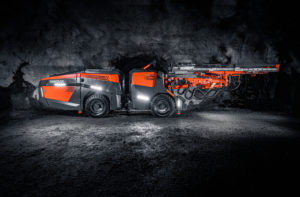 The fully functional AutoMine Concept Underground Drill, referred to internally during the lead-up to its introduction as ‘Amelia,’ showcases next-generation intelligent automation, already proven on the AutoMine Concept Loader, along with other new technologies and features that will be introduced for current and future Sandvik offerings. Some features will be available as standalone products and others as upgrades or options for existing products or equipment.

As a note on the latest with the AutoMine Concept Loader, Hallett said that only one was made but added that it has been on a roadshow in North America following MINExpo 2021. He said there are no plans to send this machine to any customer sites but rather to utilise it as a technology development tool and demonstrator for commercialisation of products that will be introduced into the AutoMine product offering. The latest development launched this July is the AutoMine Mapping Solution, which enables mapping of user AutoMine production areas without interrupting production.

An in-house testing platform for next level technology

Back to the new drill: “Our AutoMine Concept Underground Drill is not intended to be introduced as a commercial product,” said Johannes Välivaara, Vice President, R&D and Product Line, Undeground Drills at Sandvik Mining and Rock Solutions. “Rather, it will become our in-house platform for testing and developing new technologies our customers identify as crucial to their operations.”

When asked if it represents the beginning of a transition of Sandvik’s electric underground development drills from tethered to non-tethered, Välivaara told IM Editorial Director Paul Moore in Tampere: “Yes, this drill demonstrates what are the possibilities in operating without a traditional connection to the mine grid while drilling. We anticipate the battery techologies and related energy densities to evolve to this state in the coming years ahead.” However he added: “We still anticipate the near term underground drills product releases in our BEV line-up will still be tethered. Our first non-tethered based drills we would expect to reach commercial and technological readiness during the latter part of this decade.” 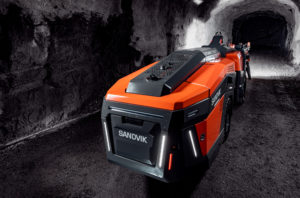 He expanded on the challenges of removing the tethered cable: “We need sufficient amount of battery energy being able to drive in and out from the face and to drill the complete round relying on the available energy onboard. On the other hand, controlling the power consumption in various states of operation is critical and there are several technological innovations around that challenge related to both tramming and drilling efficiencies. A good example of this is the Rock Pulse™, which helps delivering the impact energy from rock drill to the hole bottom in the most efficient way. This is achieved by measuring the stress waves through the drill consumables and determine the right drilling adjustments accordingly.”

The AutoMine Concept Underground Drill has no operator cabin, creating space for onboard water and battery storage and eliminating the need for supply cables or water hoses during operation. The self-contained drill uses and optimises power and electricity based on need, making onboard supply last even longer.

The drill only needs to know which tunnel and face it should tram to and can plan the rest of its mission autonomously, using data from the preferred mine planning software. Tunnel lines and profiles are planned and defined into drilling and blasting patterns in iSURE that ensure optimal hole placement, detonation and profile quality. The drill also has access to 3D models of a site, which are automatically merged from survey and mapping results. It can update and optimise the 3D model of the mine in real time based on feedback from its onboard cameras and scanners.

The drill learns and adapts to the ever-changing environment in a development heading to safely complete entire missions from entry to exit. It navigates tight spaces with agility, enabling effective use of large machines in small spaces. Once it has arrived at its destination, it uses automatic drill plan adjustment to optimise the drilling pattern and drill the full round.

“Our vision is that in the near future, thanks to the rapid advancement of battery technologies, equipment like this will be able to drill entire rounds fully on battery power, eliminating the need to plug in to a grid and improving flexibility underground,” says Jussi Puura, Digitalization Research Lead at Sandvik Mining and Rock Solutions.

During drilling, the AutoMine Concept Underground Drill uses an AI-guided automatic drill bit changer to identify when bits are worn and changes them automatically. The drill is also equipped with a lifter tube installer that simplifies the face charging procedure. Drilling data is then reported back to iSURE or Deswik to optimise the next round. The drill also uses Rock Pulse AI for continuous rock mass feedback to optimise drilling performance.

Sandvik also stated that the AutoMine Concept Underground Drill is compatible with traditional safety gate systems but is also capable of working without area isolation. It asks for assistance when re-filling consumables and recharging, plus can request intervention by an operator if it is unsure of changes to its environment.

No specifics were given on the actual charging method used for the AutoMine Concept Underground Drill – but for now it seems this will be some form of fixed charging such as a plug in method, as opposed to autonomous battery swapping as used on Sandvik’s LHDs and trucks. But going forward Välivaara told IM: “Battery swapping has proven its case within loading and hauling and we would anticipate same benefits of it being applicable for the drills also. The use case of mobile charging stations is also very much applicable with this drill to avoid long return trips. Automated connection to the charging station relies on the technologies that are already available today. Therefore we anticipate real solutions becoming available around this area not too far off in the future.”

While President Joe Biden was busy throttling the latest Corvette with car executives at the Detroit auto show last week,...

Autonomous Vehicles Will Forever Change How the Army Fights and Wins

Protecting high-value Army convoys traveling through high-threat areas are a highly difficult task. However, what if soldiers could focus on...

Nvidia Looks to Add Their Computer Chips Into Cars

Silicon Valley-based Nvidia, a global leader in artificial intelligence hardware and software, is set to release a powerful new processor...