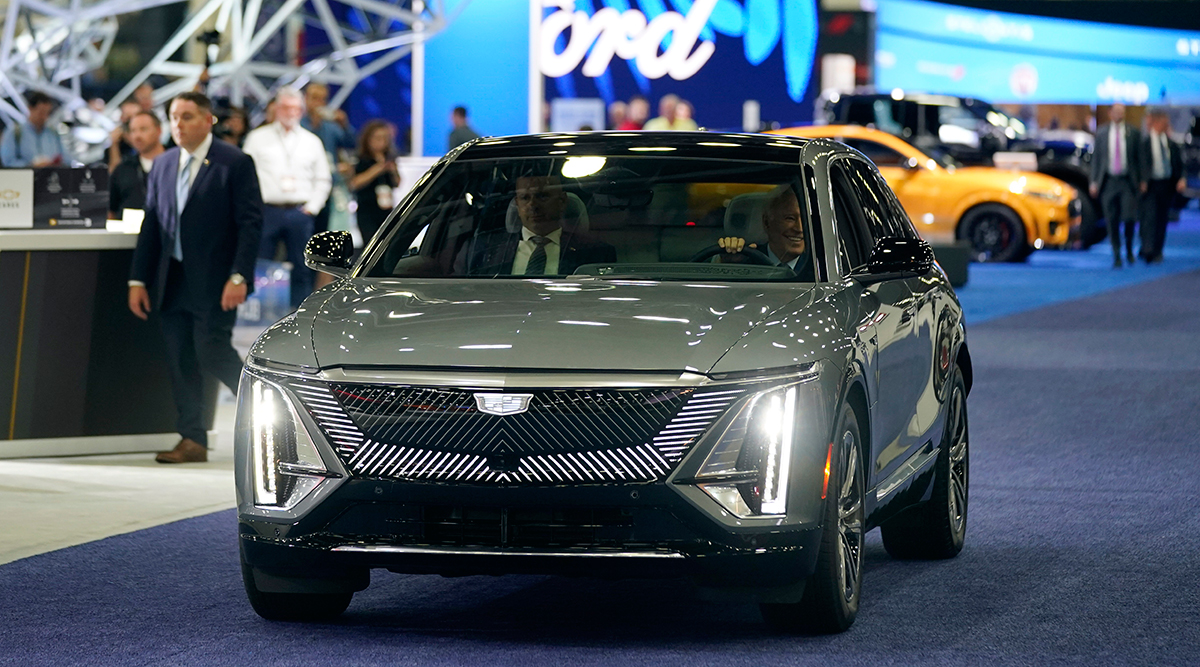 President Joe Biden drives a Cadillac Lyriq through the show room during a tour at the 2022 Detroit Auto Show. (Evan Vucci/Associated Press)

About 900 workers at the new plant near Warren, Ohio, are the first to decide on union representation at a battery plant. The union says in a statement Dec. 9 that workers voted 710-16 for the UAW, a decision that is crucial to the future of the 372,000-member union.

As batteries replace gas-powered engines, employees at GM engine and transmission factories will need places to work as their products are gradually phased out over the next decade or so.

GM has pledged to sell only electric passenger vehicles by 2030, and the Ohio plant is the first to begin making battery cells that will go into packs that make electric vehicles go.

The company has announced the sites of two other North American battery factories in Lansing, Mich., and Spring Hill, Tenn., to be built in a joint venture with LG Energy Solution of South Korea. The location of a fourth plant, built by the Ultium Cells joint venture, is expected to be announced soon.

“The vote shows that they want to be part of maintaining the high standards and wages that UAW members have built in the auto industry,” union President Ray Curry said in the statement.

GM CEO Mary Barra told the Automotive Press Association in Detroit on Dec. 8 that the company welcomes the union at its battery plant. GM, she said, has worked with the UAW on health and safety, quality and training issues. “There’s a lot that we can do together,” she said.

The union represents about 150,000 workers employed by the three Detroit automakers, and sees organizing the battery plants as key to its future.

Curry, who is in a runoff election to lead the UAW next year, said in a July interview that representation at the battery plants is critical, given that major automakers are staking their futures on widespread use of electric vehicles.

“It’s going to be key to lock down that type of new technology,” he said. “Everybody is dependent upon what happens out of that bargaining.”

In addition to GM, Ford has announced plans to build three U.S. battery factories, all in Kentucky and Tennessee, states where workers may not be as amenable to unions as the Great Lakes region. Stellantis, formerly Fiat Chrysler, will build one battery plant in Canada and another in Kokomo, Ind.

The 2024 Chevrolet Silverado EV RST is shown in Detroit. About 900 workers at the new plant near Warren, Ohio, are the first to decide on union representation at a battery plant. (Paul Sancya/Associated Press)

The union will want automakers to pay top assembly plant wages of around $32 per hour at the battery plants, the wage they now pay at engine and transmission factories. But automakers will want to pay less to keep costs competitive with companies that have battery plants in the South and West that are likely to be nonunion.

On Dec. 8, Barra said that just because the UAW represents a plant doesn’t mean its costs have to be higher. GM, she said, knows how to run its operations efficiently and has strategies to do that. But she said GM still has to be competitive so it can reinvest in its business and keep workers’ jobs secure.

“When you have that conversation on the plant floor, they get it,” Barra said. “We’ll work through it. I don’t subscribe that that means we’re going to have higher costs necessarily.”

Barra said she would like to get a contract with the union at the Warren plant as quickly as possible. But the issue could be rolled into national contract talks with the automakers that are coming next year. The talks could become contentious with new union leaders who want to take a more confrontational stance.

The UAW sought the election, run by the National Labor Relations Board, after it said GM wouldn’t recognize cards that Warren employees signed to join the union.