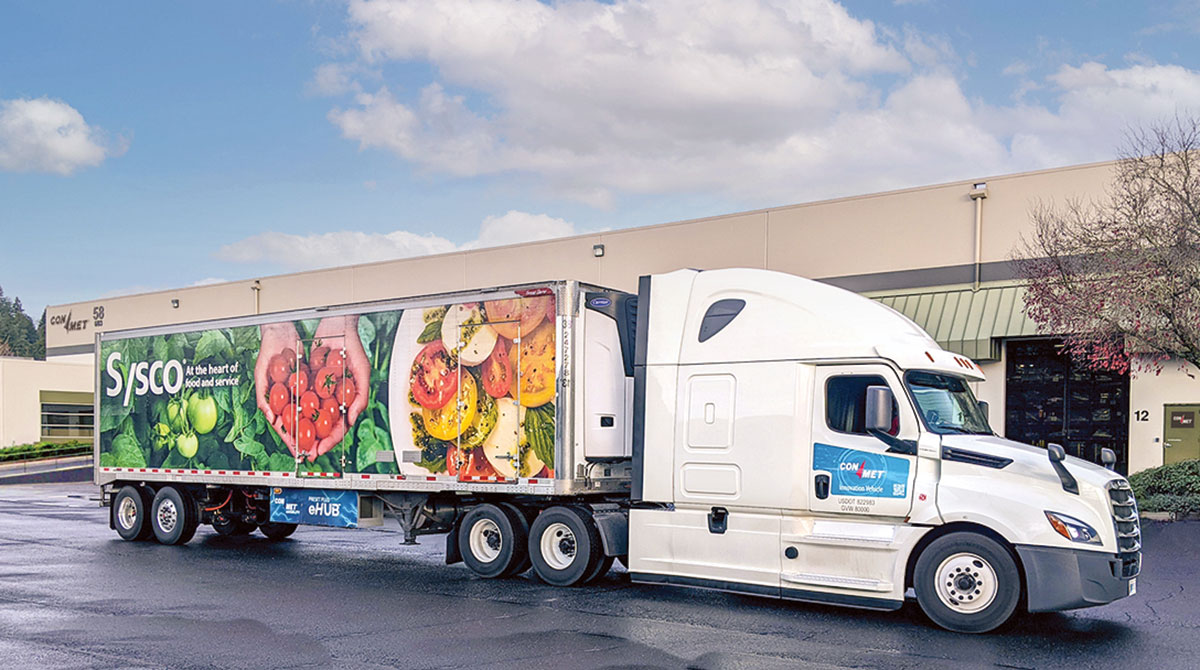 While all-electric transport refrigeration units might seem a relatively new development in the refrigerated transportation segment, the technology has developed over the last 20-plus years.

Marc Trahand, vice president and general manager of ConMet eMobility, noted that development of all-electric TRUs is in part a response to regulatory action by the California Air Resources Board (CARB). In February 2022, CARB adopted rules to achieve additional emission and health risk reductions from diesel-powered TRUs and increase the use of zero-emission (ZE) technology in refrigerated transportation.

Starting at the end of 2023, truck operators must turn in or replace at least 15% of the box trucks in their fleet with units using ZE technology.

Suppliers also have been developing all-electric TRUs for refrigerated trailers. Trahand said ConMet developed the PreSet Plus eHub system, a part of the Carrier Transicold Vector eCool TRU. The eHub integrates an electric motor with a hub assembly to capture regenerated energy that would otherwise go wasted as heat from friction brakes. While regulatory concerns and a desire by companies to reduce the carbon footprint of their fleet operations rank high, refrigerated fleets also want a system that’s reliable, he added.

“Looking at a commercial vehicle industry, everybody has to think of this as a work tool. Its job No. 1 is to bring refrigerated goods to wherever they need to go, and that cold chain cannot be broken at any time. Nor do fleets want any downtime,” Trahand said. “So I think when you’re delivering an electric trailer to fleets, that’s what they’re looking for. ”

Development of all-electric TRUs was also made possible by earlier generations of eTRUs nearly two decades earlier. However, progress for manufacturers was hindered by adaptation difficulties and lack of sufficient infrastructure for shore-power access.

Since then manufacturers have come up with various iterations of eTRUs such as Carrier Transicold’s legacy Vector, an all-electric refrigeration system traditionally powered by an onboard generator run by a diesel engine. SafeConnect Systems also offers shore-power options by installing new hybrid-electric TRUs that can plug into stationary sources of power when the trailer is at a dock door or staged.

“Customer reception for the Vector eCool system has been very good,” Maddox said. “At this stage, fleets are interested in piloting the technology in their operations. Potential purchasing incentives exist at both state and federal levels.”

While an all-electric TRU can double the cost of a new refrigerated trailer or box van, ConMet’s Trahand estimates fleets could easily recoup that additional cost in five years with operational savings from reduced fuel costs and maintenance. Last year, California provided a $125 million project funded by proceeds from the state’s cap and trade auction. The funds were intended to encourage California off-road equipment users to purchase or lease currently commercialized ZE off-road equipment. To help offset the higher cost of ZE TRUs, the project provided 274 vouchers with nearly $32.9 million in point-of-sale discounts.

Carrier Transicold is expected to unveil its Supra line later this year. Maddox said it is an example of a refrigeration system that will operate by battery without a built-in power generation system. It is designed to operate either via its own battery system when it is used on a truck with an internal combustion engine, or EV battery, he added.

Maddox said some customers with existing engine-driven Vector systems have adopted the eCool technology to power their systems. “Retrofits can potentially be a faster, more affordable point of entry for fleets that want to trial the new technology,” he said. “Having the engine also provides added performance assurance as fleets learn how to integrate the battery technology into their existing operations.

In 2021, Thermo King launched its Evolve all-electric product line with one unit for middle- and last-mile delivery and Classes 5-7 vehicles. (Thermo King)

In 2021, Thermo King launched its Evolve all-electric product line with one unit for middle- and last-mile delivery and another unit for Classes 5-7 vehicles with a variety of cargo box sizes. Late last year, Thermo King completed nearly 2,500 operational hours of testing of an Evolve demonstration trailer with retailers Walmart, Loblaws and Martin Brower.

“Infrastructure [also] plays an important part in the decision of electrification,” Doerr continued. “Most of our customers are actively talking with their utilities around the best options for adoption.”

According to a position paper on trailer electrification published by Thermo King last year, one critical design factor in the design of battery-electric transport refrigeration units (BETRU) is where to place the AC/DC converter. Due to cost considerations, an operator can provide AC power directly into the BETRU. An onboard charger then converts the incoming AC power from a level 2 charger into the high-voltage DC power that the battery pack will need. The position paper says that while this saves money on the infrastructure side, it significantly raises the cost of each BETRU. Having the converter installed on the charger station is significantly cheaper, but also limits the applicable charging locations for the BETRU.

Trahand said he also sees the ability of fleets to charge their eTRUs and BETRUs as an important part of gaining the best outcome.

“Not every facility is equipped today [with shore power capability] and that’s definitely a challenge in the industry, but we’ve managed to have our product working with a company that had no shore power, no charging available, and we were still running close to 100% electric on all routes,” he said. “So it’s been interesting to see how even without infrastructure, the generation on the roads can be a big success.”